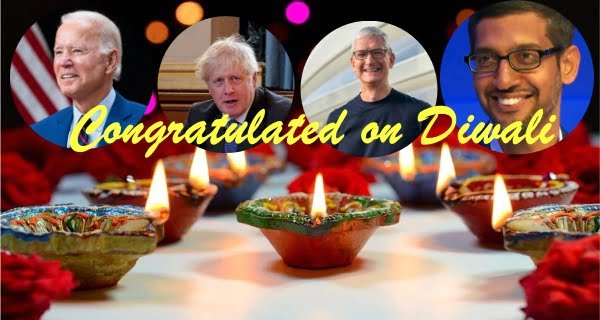 Biden’s office tweeted, ‘Wish that the light of Diwali blesses us that beyond darkness lies wisdom, wisdom, and truth. There is solidarity ahead of division. There is hope ahead of despair.’ The US President said, ‘Happy Diwali to the Hindus, Sikhs, Jains, and Buddhists celebrating this festival in America and around the world.’

US Vice President Kamala Harris in a video message reminded people to “respect the light” and extend a helping hand to those in need. “Happy Diwali to everyone celebrating the festival of light in America and around the world,” he said.

British Prime Minister Boris Johnson said, ‘Congratulations to the people celebrating Diwali and Bandi Chhore Day in the UK and around the world. I hope Diwali and Bandi Chhor Diwas are special for our Sikh friends… I express my great gratitude to the Hindu, Sikh, Jain people of Britain who have helped the vulnerable for the last 18 months and helped people stay safe. He said, ‘I want to wish everyone in Britain and people around the world, especially friends from India, a Happy Diwali.’

Air travel can be expensive, ATF prices increased by 2.75 percent

02/01/2022/8:48:pm
New Delhi: Traveling by plane can be expensive now. In fact, amidst the increase in the prices of crude oil internationally, the prices of...

Yoshihide Suga talks to Trump after taking over as Prime Minister

21/09/2020/9:02:pm
Tokyo: Yoshihide Suga held the first formal conversation with US President Donald Trump after taking over as Prime Minister of Japan. His first diplomatic...

Will train services be banned? Railway Board replied

09/04/2021/8:52:pm
New Delhi: The second wave of the Corona epidemic is continuously increasing and taking frightening forms. In the meantime, there is a discussion that...