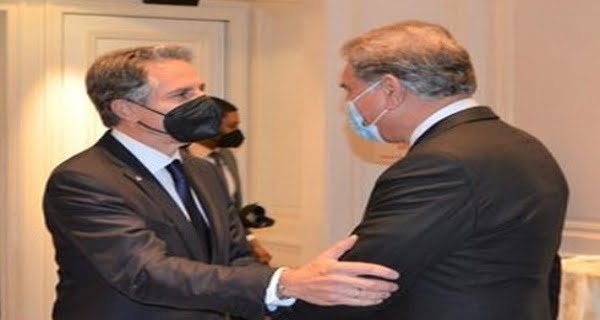 Washington: US Secretary of State Antony Blinken with Pakistan Foreign Minister Shah Mahmood Qureshi on the sidelines of the 76th session of the United Nations General Assembly. met. During this, the two leaders discussed the further courses of action in Afghanistan and stressed the importance of the two countries working together on this issue.

Blinken said during a meeting with Qureshi in New York on Thursday that his focus is on Afghanistan, the two countries working together and moving forward in Afghanistan. Blinken appreciated the work done by Pakistan to facilitate the departure of US citizens and others who wish to leave Afghanistan. According to State Department spokesman Ned Price, the two leaders discussed further courses of action in relation to Afghanistan.

“Blinken reiterated the importance of coordinating our diplomatic relationship and facilitating the departure of those wishing to leave Afghanistan,” Price said. The minister said the US appreciates Pakistan’s support and assistance in both of these efforts.

Qureshi said, “I thought that there will come a time when we will talk about something other than Afghanistan, but Afghanistan is still under discussion… We need to work collectively to achieve our common objective – peace and stability.” A way has to be found.”

The Taliban began occupying parts of the country after the US began withdrawing its troops from Afghanistan on May 1 and took control of Kabul on August 15. The Taliban declared victory over opposition forces in Afghanistan after taking control of Panjshir on September 6.

28/10/2020/9:08:pm
New Delhi: Union Minister Smriti Irani has been found to be infected with the coronavirus. The Union Minister has given information by tweeting. After...

15/07/2020/10:17:pm
Bengaluru: The Karnataka government said on Wednesday that those who have been relieved of Coronavirus infection and want to donate plasma for the treatment...