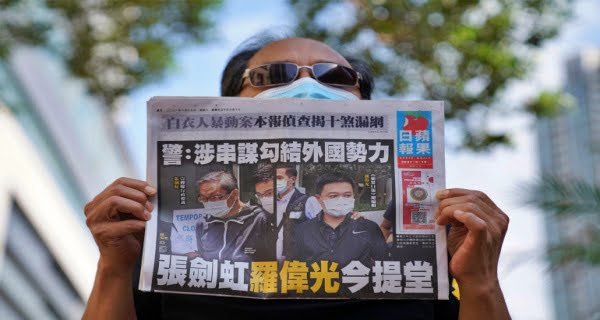 Hong Kong: Hong Kong’s 26-year-old pro-democracy newspaper Apple Daily has been shut down. Its last edition was published on Thursday. People started reaching outside the newspaper office since the night in the midst of rain so that they could increase the enthusiasm of the staff. As soon as 8 o’clock in the morning, 10 lakh copies of the newspaper were sold.

In the last edition of Apple Daily, on the front page, there was a photo of a staff member waving his hand at his supporters. Its headline was- ‘Hong Kong residents said painful goodbyes in the rain.’ At the same time, people across the country gave an emotional farewell to the newspaper.

This newspaper used to publish 80 thousand copies every day. The newspaper’s graphics designer, Diction Ng, told Global Times- ‘Today is our last day and this is the last edition. With this ending, it has become clear that the freedom of the press in Hong Kong is coming to an end.

Joe Biden said – this sad day for democracy
US President Joe Biden called it a sad day for media freedom in Hong Kong and around the world. According to a White House statement, the US president said Beijing used its power to suppress free media and silence dissenting views through arrests, threats and coercion through a stringent national security law punishing free speech. is.

President Biden said, “Independent media plays an important role in resilient and prosperous societies. Journalists are truth-tellers who hold politicians accountable and provide information freely. It is needed now more than ever in Hong Kong and around the world in places where democracy is at risk.”

Biden made this appeal to China
US President Joe Biden called on China to stop targeting the free press and to release detained journalists and media officials. He said that journalism is not a crime. Biden said, “People in Hong Kong have the right to freedom of the press. Instead, Beijing is denying basic freedoms and attacking Hong Kong’s autonomy and democratic institutions and processes, which are inconsistent with its international obligations.

18/08/2020/10:14:pm
New Delhi: The collegium of the Supreme Court has approved the appointment of six lawyers as judges of the Delhi High Court. The collegium...