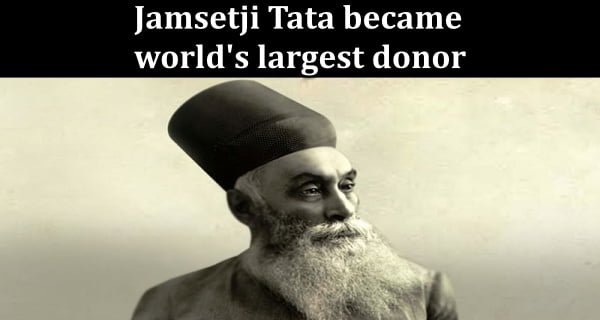 New Delhi: Warren Buffet, one of the world’s biggest investors, today donated a huge amount of 30 thousand crores to the Gates Foundation. After this, once again this debate has erupted as to who is the world’s biggest donor. Let us tell that the name of Jamsetji Tata, the founder of Tata Group, is at the first position in this list. Jamsetji Tata has emerged as the world’s largest philanthropist by donating $ 102 billion in the last 100 years. Jamsetji Tata tops the list of top 50 donors prepared by Hurun Report and EdelGive Foundation.

Jamsetji Tata started charity from 1892
The list of the world’s top donors shows that Tata is the founder of a group that makes everything from salt to software. He is ahead of many charities like Bill Gates and his estranged wife Melinda, who donated $ 74.6 billion. Apart from the Gates couple, Warren Buffett has so far donated $37.4 billion, George Soros $34.8 billion, and John D Rockefeller $26.8 billion. Hurun President and Chief Researcher Rupert Hoogwerf said Jamsetji Tata, the founder of India’s Tata Group, is the world’s biggest philanthropist. He said that Jamsetji gave two-thirds of his assets to the trust, which is working in many areas including education and health. Jamsetji Tata started donating in 1892.

The second Indian included in the list is Azim Premji.
The second Indian on this list by Hurun Report and EdelGive Foundation is Wipro’s Azim Premji. He has donated his entire wealth of about $ 22 billion for philanthropic works. Hoogwerf said there are some names, like Alfred Nobel, who is not even on the list of the top 50 donors of the last century. 39 people on the list are from America. After this, 5 people from Britain (UK) and 3 people from China are involved. A total of 37 donors have died in this. At the same time, only 13 people from the list are alive. Hoogwerf also said that today’s billionaires are earning faster than they donate.

17/06/2020/9:56:pm
New Delhi: The central government has informed the Delhi High Court that it has suspended a website linked to the official mobile application 'Arogya...

10 lakh notes issued in Venezuela, to deal with the cash strapped and severe...

08/03/2021/10:19:am
Caracas: The South American country Venezuela has issued a new currency note of 1 million bolivars to deal with the cash-strapped and severe inflation....