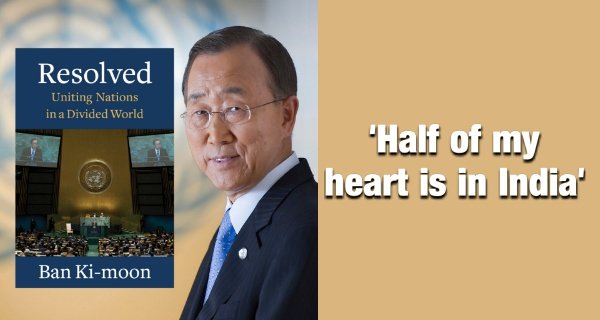 New Delhi: Former UN Secretary-General Ban Ki-moon’s first diplomatic posting to India took place and he has established such a special relationship with the country that even after 50 years, half of his “heart resides in India”. Ban also mentioned in his autobiography that his three-year stint in India was one of the most exciting times of his life.

In Resolved: Uniting Nations in a Divided World, published by HarperCollins India, Ban describes how he went from being a “child of war” to an “angel of peace”. Born in 1944, just a year before the United Nations came into existence, Ban Ki-moon’s earliest memories are of the sound of bombs falling on his Korean village and the rest of the things going up in flames.

Of his days in India, Ban wrote, “I had my first diplomatic posting in India, and Soon-Tak (wife) and I arrived in Delhi in October 1972. I served there for almost three years, first as the Deputy Consul General of the Korean Consulate and as the Second Secretary of the Korean Embassy after full diplomatic relations between Korea and India were established in December 1973.”

Ban’s daughter Seon-yong was just eight months old at the time and their only son, Woo-hyun, was born in India on 30 October 1974. Ban wrote, “I used to joke with Indian people that my ‘balance sheet’ with India is correct because my son was born in India and my youngest daughter Hyun-hee was married to an Indian man. Almost fifty years later, I still tell the Indian people that half of my heart is in their country.”

He says his work in India as a young diplomat was challenging but fascinating. He wrote that the primary goal was to provide full diplomatic recognition by India. Ban led the United Nations during an unstable period, meeting challenges and resistance with a belief in the United Nations’ mission of peace, development, and human rights. He faced the ‘Arab Spring’, the start of nuclear programs in Iran and North Korea, the Ebola epidemic, and conflict in Central Africa during his tenure.

In the book, Ban also tells about his election to the top UN office in 2006, in which India’s Shashi Tharoor was also a contender. Ban claimed, “At that time, the Thailand candidate Surkiart Sarthithi seemed like a real opponent to me. Tharoor and (Sri Lankan diplomat Jayant) Dhanapal did not have the strong support of their governments.”

Ban wrote, “The results (of the first straw poll) exceeded my expectations. I was late, but now I was ahead. The route to the 38th floor of the UN Secretary-General’s office was visible. But I could not help but worry that the negative vote came from a permanent member of the Security Council. It was rumored that Shashi Tharoor didn’t get the support of the Indian government, but the fact that he got 10 votes made me restless.”

23/09/2020/9:50:pm
Mumbai: The NCB has sent a summons to four Bollywood actresses on Wednesday, furthering the investigation of drugs angle. NCB officers went to the...

Protest against state and central government in Solapur, Kolhapur

13/09/2020/11:26:pm
Pune: Members of the Maratha Kranti Morcha (MKM) protested against the state and central government over Maratha reservation at Shivaji Chowk in Solapur on...