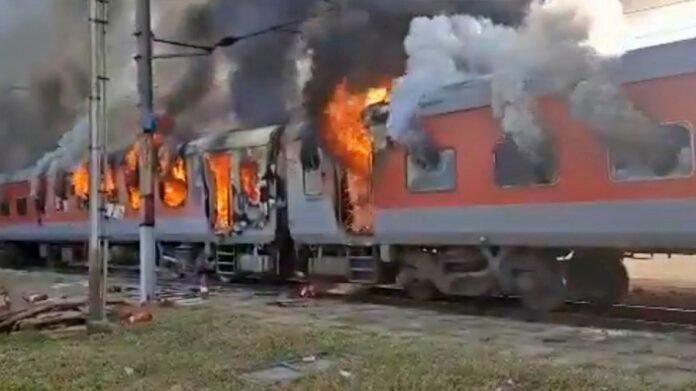 New Delhi: According to big news, two bogies of Durg Express going from Delhi to Chhattisgarh caught fire on Friday. This fire has started between Dholpur-Morena in Madhya Pradesh. The train has been stopped at Hetampur railway station. Fire brigade vehicles have reached the spot. No casualties have been reported.

North Central Railway CPRO Dr. Shivam Sharma said that fire was received from Hetampur railway station in A-1 and A-2 coaches of Udhampur-Durg Express due to unknown reasons. No casualties have been reported and the passengers have been evacuated safely. The front portion of the train has been separated and the fire brigade has arrived. This train has been stopped and all other trains are on their original schedule.

13th is ‘Lucky’ for Rohit Sharma, created history by scoring a double century for...

Kerala will have to fight more with Corona now, cases maybe double in a...

06/08/2021/9:24:pm
Thiruvananthapuram: The outbreak of the second wave of corona in the country may have subsided, but the epidemic has spread tremendously in Kerala. About...