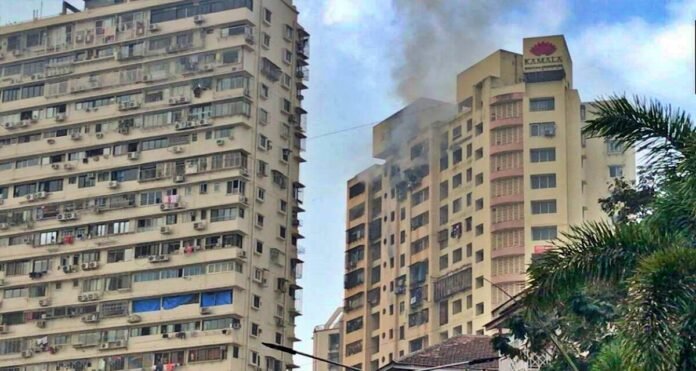 Mumbai: A fire broke out in a multi-storeyed building in Mumbai’s Tardeo on Saturday morning. It is reported that the death toll in the accident has increased to 7. At the same time, many people are seriously injured. It is being told that this is a level 4 ie fierce fire. As soon as the information of the incident was received, 24 fire tenders reached the spot to control the fire. Apart from this, 5 ambulances are also on the spot. Firefighters are constantly trying to douse the fire.

It is reported that the fire started at 7:30 am in a 20-story building named Kamala Society located near Bhatia Hospital in the Tarddev area. A Brihanmumbai Municipal Corporation (BMC) official said the fire broke out around 7 am in the building ‘Kamala’ located opposite Gandhi Hospital in Gowalia Tank. He said, ‘It is a 20-story building. The fire started on its 18th floor. On receiving the information, fire brigade personnel and police reached the spot. 13 fire tenders and seven water tankers have been pressed into service in the firefighting operation.

The big accident happened only three months ago
In October last year, a fire broke out in a multi-story building on Mumbai’s Curry Road, in which a security guard collapsed and died. According to the report published in the language, a security guard fell down from a flat after a fire broke out on the 19th floor of a 61-story residential building in the metropolis, killing him. A fire department official gave this information. A video of the incident is going viral on social media in which the man can be seen hanging from the balcony before falling.

Meanwhile, the fire brigade has rescued 16 people trapped in the building. A fire department official said the fire had spread from the 19th floor to the 20th floor and was brought under control after about five hours of effort. 16 fire tenders, nine water tankers, and two ladders were used to douse the fire.

02/04/2022/11:09:pm
Karauli: After violence between two communities in Karauli city of Rajasthan, District Collector Rajendra Singh Shekhawat has imposed Section 144. Not only this, orders...

Government in preparation for changes in New Labor Code, take-home salary will decrease

Mamta Banerjee got angry when Center stopped her from going to Rome, said- PM...

26/09/2021/11:15:am
Kolkata: West Bengal Chief Minister Mamata Banerjee has targeted the Modi government at the Center. For the past several days, there has been a...

Corona infection, even after taking both doses of vaccine in Madhya...

Massive fire broke out in Vapi’s paper mill, 20 vehicles of...