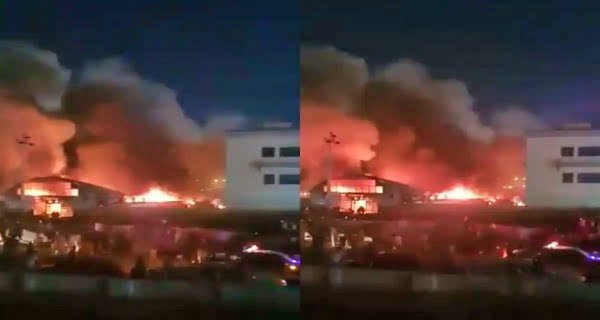 Iraq: A painful accident has occurred at a Covid-19 hospital in Nasiriyah, Iraq. 39 people have died and 20 people have been injured in a massive fire in this hospital.

Health officials and police have informed on Monday that the accident took place due to an explosion in the oxygen tank at the hospital in Nasiriya. This led to a massive fire that killed at least 39 people. Prime Minister Mustafa al-Kadhimi held an urgent meeting with senior ministers and ordered the suspension and arrest of health and civil protection managers in Nasiriyah.

Nasiriya health officials said relief and rescue operations were underway at Al-Hussein Corona Virus Hospital after the fire was brought under control, but thick smoke made it difficult to enter some wards. The preliminary police report states that the fire was caused by an oxygen tank burst inside the Covid 19 wards of the hospital. Ali Muhsin, a guard of the hospital, said that I heard a big explosion inside the Kovid ward and then the fire started very fast.

Let us inform you that 17,592 people have died due to coronavirus in Iraq and more than 1.4 million people have been infected. A Reuters reporter at the scene said health workers pulled bodies from the burning hospital while several patients were coughing under the smoke.

02/08/2020/8:47:pm
New Delhi: After the Coronavirus outbreak, once again the tension between the US and China has increased. But, Elon Musk, the CEO of Tesla...