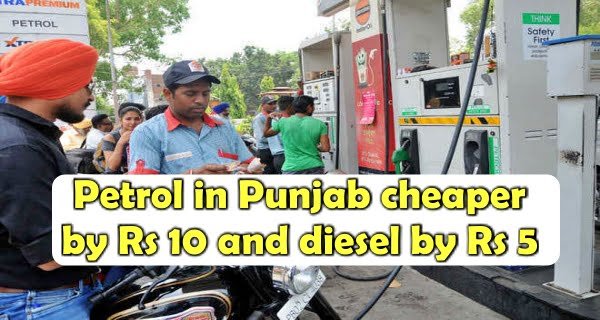 Chandigarh: The Punjab Government has given great relief to the people of the state. Chief Minister Charanjit Singh Channi announced that petrol would be cheaper by Rs 10 per liter and diesel by Rs 5 per liter in the state. The new rates will be applicable in Punjab from midnight tonight.

Chief Minister Charanjit Singh Channi made this announcement while addressing the media after the cabinet meeting. “We are reducing the price of petrol by Rs 10 per liter and diesel by Rs 5 per liter from midnight onwards,” Channi said.

Let us tell you that there was a demand from Punjab Petroleum Dealers Association to reduce VAT in the state. They also threatened to go on strike if the government did not accept their demand. Eventually, the Punjab government decided to reduce VAT. Let us inform that earlier Congress State President Navjot Singh Sidhu had talked about giving relief on petrol and diesel.

10/08/2020/10:34:pm
New Delhi: Petroleum and Natural Gas Ministry today organized a webinar on the occasion of the World Biofuel day with the theme Biofuels towards...

China: Chang E 5 spacecraft Preparing to come to Earth with samples from...

03/12/2020/11:24:am
Beijing: China's Chang E5 spacecraft has successfully completed the collection of samples from the surface of the moon and is now ready to land....

Application allowed for some people seeking US H-1B visa, know who can apply

24/06/2021/9:03:pm
Washington: Foreign guest workers in the US will be able to reapply for H-1B visas whose applications were rejected based on the initial registration...

Uttar Pradesh will poll in fifth phase on Sunday, voting will...

Election Commission postponed urban body elections for 3 months due to...

Rain and snowfall in the mountains changed the weather patterns