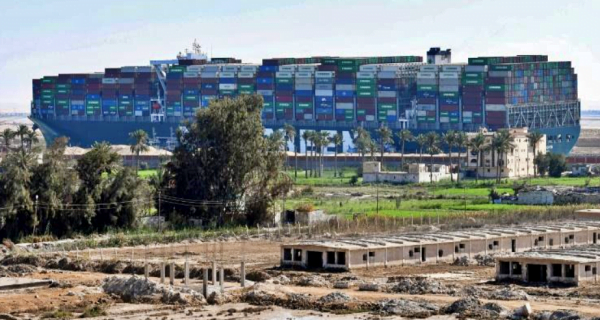 Cairo: A few days ago, authorities have taken major action on the giant ship Ever Given, stuck in the Suez Canal, Egypt. Here the officials of the canal have seized the ship. Along with this, compensation of 90 million dollars has also been sought. It has been said that this ship has been seized on the orders of the court. The ship will be released only after paying the amount. The special thing is that due to being stuck in the canal for about 1 week, the business had to suffer a lot at the global level.

In March last, the MV Ever Given ship was stuck in a narrow canal. After an effort that lasted for about 6 days, it was removed and the way was resumed. Other ships were jammed in the canal due to the stuck-up of Ever Given alone. Along with Egyptian soldiers, the assistance of international level experts was also taken to evacuate the stuck ship.

It is significant that during this time, Egypt was also losing revenue of about 12 to 15 million dollars every day. Osama Rabi, the head of the Suez Canal Authority, told the Al Ehram newspaper that ‘Ever Given has been seized due to non-payment of $ 90 million compensation.’ Although Rabi did not name Japanese owners Sui Kishen Kaisha during this time, other sources in the authority told AFP on Tuesday that discussions were continuing between the company, the insurance company, and the canal authority.

Referring to the order of the Ismailia Economic Court of Egypt, Rabi said that the amount of compensation has been calculated on the basis of ‘the damage caused by the stalled ship as well as the flotation and maintenance expenses’. At the same time, it is being said that the canal has also suffered a lot during the stoppage of the ship and while trying to evacuate it.

28/09/2020
New Delhi: Railway passengers may have to shell out additional Rs 10-Rs 35 for their ticket fares as user charges for availing redeveloped stations...

Asked to wear a mask in the US, the two sisters stabbed the security...

28/10/2020
Chicago (USA): In Chicago, USA, two sisters are accused of stabbing a security official 27 times. The security guard of the shop had requested...

22/06/2020
Ahmedabad: Former state chief minister and senior leader Shankar Singh Vaghela has resigned from the post of general secretary with primary membership of the...

11/02/2021
Dakar, Senegal: On Wednesday, 28 Togo peacekeepers were injured in an attack on a temporary United Nations base in Mali. UN spokesman Stephen Dujarric...