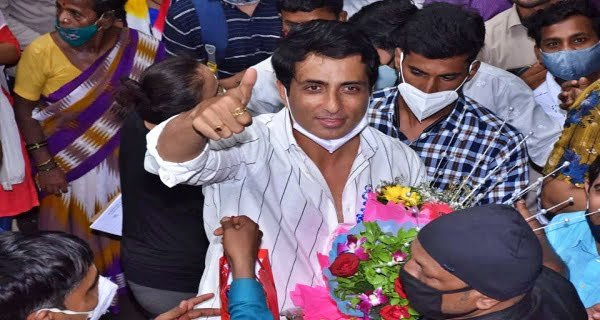 Mumbai: Bollywood actor Sonu Sood is at a new height of popularity across the country by becoming a hero in real life. He has helped the poor, migrant laborers, and the needy in every possible way since the first phase of the coronavirus. Today on July 30, Sonu Sood is celebrating his 49th birthday. On this special occasion, fans, friends, and family members from all over the world are wishing him.

Sonu Sood’s fans gathered outside his house in large numbers with their gifts, bouquets, cakes, posters, etc. A huge crowd gathered outside his house, which had to be struggled to handle. Sonu came among his fans and after cutting the cake, got a lot of photography done with the fans. Sonu Sood gave his darshan to the fans in this way. It was as if they had climbed the gate.

On Sonu Sood’s birthday, lakhs of his fans were craving a glimpse of him outside his house, but this is Sonu Sood. How can he disappoint his fans? On the occasion of his birthday, Sonu Sood met the fans standing outside his house. Not only this, but when he joined hands with the fans, he also cut the cake brought by many fans. Sonu Sood has once again won everyone’s heart with this style.

Sonu Sood has made a special place in the hearts of fans with his work and behavior. A fan feeds them a cake.

His fans gathered outside the house to wish Sonu Sood a birthday. People of all ages and girls were also included in his fans. Fans were eager to get a glimpse of him.

Some had come to wish the actor with a bouquet, while some had come by making posters and sketches. Some fans had arrived with a cake for Sonu Sood. All the fans wanted to make this birthday of Sonu memorable. Actors also never disappoint their fans.

Let us tell you that on the birthday of Sonu Sood, his fans were standing outside his house in a crowd. Everyone wished the actor a happy birthday in their own way. In such a situation, there was a person present who is currently on social media. Seeing this, the fan of Sonu Sood even made a picture of his favorite star on paper with the help of his tongue in front of the actor. Everyone was really surprised to see this sight.

A fan-made a picture of him with his tongue in front of Sonu Sood. The fans did not want to leave any stone unturned to make them feel special on the birthday of their favorite actor.

Sonu Sood with the fans who made pictures in front of everyone with tongue in no time. Viral Bhayani has also shared the video of making the picture.

Sonu Sood took bouquets from one of his fans and many fans were wishing him a birthday in their own way. The happiness of the actor is being seen in this photo.

Many fans had taken a cake for him. Many cakes were seen on a table outside his house. Sonu Sood holding a cake in his hand.

Sonu Sood was also very happy after getting so much love from his fans. And he thanked all the fans from the heart. Sonub Sood has once again won everyone’s heart by praising the fans in his tweet. Sonu Sood tweeted, “Many thanks to everyone who has come from different parts of the country to wish me on my birthday. Really grateful for everyone’s love and blessings.”

17/02/2021/4:21:pm
New Delhi: The defamation case filed against journalist Priya Ramani has been rejected by the Delhi Court. The court said that the woman has...