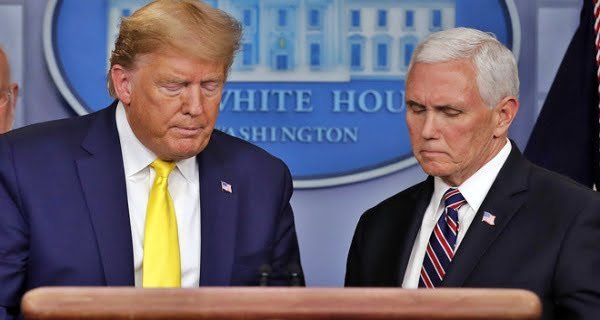 Washington: US Vice President Mike Pence has met outgoing President Donald Trump for the first time since Trump’s supporters’ violence in the US Parliament Capitol Hill. According to the statement by the Trump administration, there was a ‘good conversation’ between the two leaders. On 6 January, after Trump came out openly against violent Trump supporters, Trump ordered the Pence Chief of Staff to leave the West Wing. Trump supporters also shouted ‘Hang Mike Pence’ slogans outside Parliament.

On the other hand, Trump has approved the emergency in the country’s capital Washington DC until the inauguration program of newly elected President Joe Biden. His decision has come at a time when the process of impeachment has started on President Trump. On Monday, President Donald Trump announced that an emergency existed in the District of Columbia. In a statement issued by the White House press secretary’s office, it said that in view of the 59th President’s inauguration program, there will be an emergency situation from January 11 to January 24.

Democratic Party leaders have demanded from Pence that he begin the process to remove the trump. US security officials feel that violence can spread in America even during Biden’s swearing-in ceremony. Surveillance has been increased in states such as Washington, Georgia, Kansas, Ohio, Michigan, California, Colorado, Utah, New Mexico, Wyoming and Texas. In view of the violence, a 20-foot-high steel mesh is being installed around Capitol Hill. At the same time, the security of the White House has also been increased.

Trump upset over Mike Pence’s not going against the constitution
Earlier, Trump supporters attacked the parliament and vandalized inside. During this time Mike Pence was present inside the Parliament. Mike Pence was the last hope for Trump to reverse the results of the presidential election held in November last year. Trump was reportedly angered by Mike Pence’s not going against the constitution. Trump had also openly expressed his displeasure by tweeting. Not only this, during the violence in Parliament, some supporters of Trump had even demanded the hanging of Mike Pence. Following this violence, Democrat Party leaders have been demanding Mike Pence to implement the 25th Amendment of the Constitution and declare Trump an unfit for the President’s office. However, Pence is repeatedly rejecting this demand.

Despite all Trump’s statements, Mike Pence, like a true soldier, did not say anything against his President, while his advisers asked him to do so. Mike Pence has announced that he will attend Joe Biden’s swearing-in ceremony. On the other hand, Donald Trump has announced that he will stay away from this ceremony. Pence’s colleagues are angry that Trump did not even call him when Mike Pence went to the bunker to save his life from Trump supporters.
Mayor has already imposed an emergency in Washington DC
On Sunday, Washington DC Mayor Muriel Bauser declared an emergency for 15 days. The mayor said that a state of emergency has been announced in the wake of fears of violence in Washington during Biden’s inauguration. In the letter sent to the White House, it has been said that after the violence in the Capitol on January 6, there are indications that the violence may continue further.

In the letter sent to the White House, it has been said that our administration has reviewed the preparations for the inauguration. In this, DC National Guard has been requested to provide help till January 24. The Department of Homeland Security and the Federal Emergency Management Agency have since been authorized by the White House to coordinate resources with state and local authorities.

24/06/2020
Beijing: China has also warned of retaliation after the US has added four more media institutions to China's "foreign missions" list. The US has...

The khalasi system will be finished soon, there will be no new appointment now

07/08/2020
New Delhi: Indian Railways is going to close the telephonic attendant-cum-dak khalasis -TADKs, which has been running since the time of the British. Also,...

medicine but it cannot sell it as a Covid-19 medicine.

01/07/2020
New Delhi: "The AYUSH ministry has allowed only that particular substance to be sold as an immune-enhancing substance and not to be sold as...