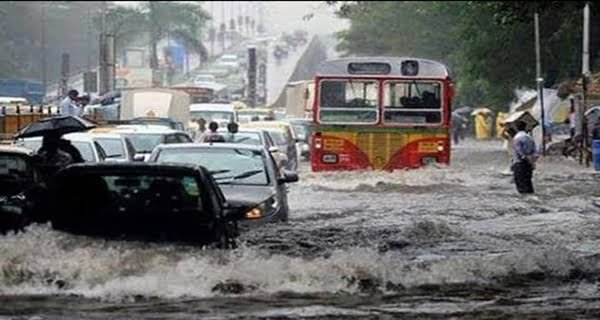 Mumbai: In Mumbai overnight heavy rains caused flooding in many areas on Wednesday morning, affecting road and rail traffic. The official said that it started raining in Mumbai late Tuesday evening. There was heavy rain overnight in Mumbai. Mass transportation services were affected on Wednesday morning due to waterlogging at several places in the financial capital.

The civic body official said that many roads and low-lying areas were flooded due to overnight rains and road traffic was severely affected. Traffic was also disrupted due to the closure of several vehicles in the water. A spokesman for the Central Railway said that suburban services were suspended at five in the morning due to heavy rains.

“Due to heavy rains and waterlogging in Sion-Kurla and Chunabhatti-Kurla, traffic was halted in some areas of CSMT-Thane and CSMT-Vashi due to security reasons.” He said that special buses (shuttles) were also run between Thane-Kasara, Thane-Karjat and Vashi-Panvel. Changes have also been made in the timing of many long distance trains. Western Railway also reported that suburban train services were suspended due to heavy rains and waterlogging between Churchgate-Andheri stations. She tweeted, “Suburban local services between Andheri and Virar are common.”

Suburban trains, called Mumbai’s lifeline, are currently being run only for people employed in essential services due to Kovid-19 and ordinary citizens are not allowed to travel in it. The India Meteorological Department (IMD) has issued an ‘Orange Alert’ with forecast of heavy rain in Mumbai and Thane on Wednesday.

IMD Deputy Director-General K.K. s. According to Hosalikar, 273.6 mm of rainfall was recorded in Santacruz till 5 am and 122.2 mm in Colaba. The civic body official said that due to flooding of roads, the bus services of Brihanmumbai Electricity Supply and Traffic (BEST) have also been affected and traffic has also changed in many places.

World’s largest cruise ship will set out on its maiden voyage in 2022, you...

20/09/2021/10:47:pm
Cruise ships are huge ships that take people on a trip to different countries and many things related to entertainment are present on the...

08/06/2020/10:18:am
Washington, DC, which broke out in light of man George Floyd's death in police custody, remain peaceful despite US President Donald Trump's order to...

IT raids on Hyderabad’s pharma company, bundles of 143 crores were...