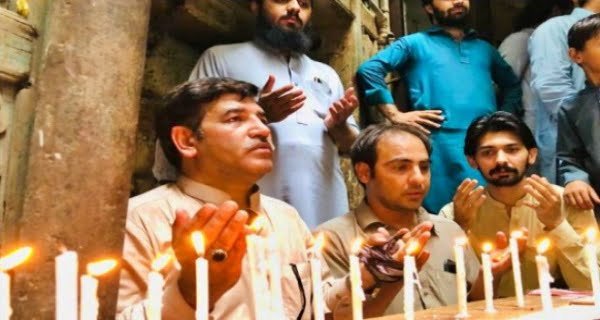 Peshawar: Veteran actor Dilip Kumar sadly passed away at a hospital in Mumbai on Wednesday morning after a prolonged illness. Dilip Sahab was cremated with state honors in the evening. He was admitted to the non-Covid intensive care unit of Hinduja Hospital located here last Tuesday. He was 98 years old. The news of Dilip Kumar’s death brought tears to everyone’s eyes. Mourning was celebrated not only in the country but also abroad. After the death of Dilip Kumar, entire Bollywood and his fans across the world are paying tribute to him. According to the news, Dilip Kumar’s ancestral home i.e. Peshawar in Pakistan was also paid tribute to him while mourning.

It is known that actor Dilip Kumar was born on 11 December 1922 in Peshawar city of Pakistan. He always remembered his childhood and the house located in Peshawar, Pakistan. People mourning the death of Dilip Kumar offered Namaz at his ancestral home in Peshawar. Apart from this, people remembered him with moist eyes by lighting candles. Videos and pictures surfaced from Peshawar are becoming very viral on social media.

Dilip Kumar’s family friend Faisal Farooqui had confirmed the actor’s death via social media. Farooqui had written, ‘With a heavy heart and extremely sad, I am announcing that a few minutes ago our dear Dilip Sahab passed away. After this, his body was taken home from the hospital. Where Dharmendra, Shabana Azmi, Shah Rukh Khan, and many of his friends, politicians colleagues, and fans including Maharashtra Chief Minister Uddhav Thackeray paid tributes.

Alogrithm will make social media safe for women, will identify vulgar comments like this

19/09/2020/9:10:pm
Roorkee(UP): Algorithm has been developed by Richi Nayak, an alumnus of IIT Roorkee, to make the social media platform for women secure. This algorithm...