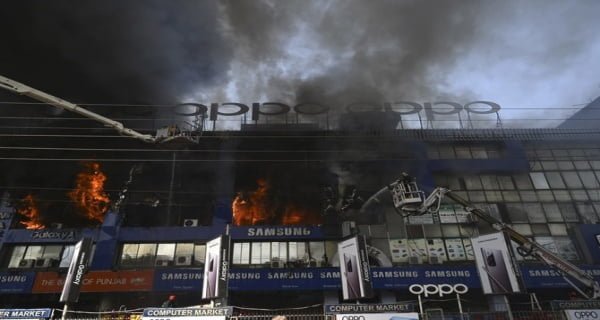 Lahore: A huge fire broke out in the largest electronic market of Lahore, burning hundreds of shops and causing loss of billions of rupees to businessmen. The fire broke out in Lahore’s Hafiz Center on Sunday. The Hafeez Center is a business center located in the famous Liberty Chowk Gulbarga and has about a thousand shops and warehouses for mobile phones, laptops, and computers.

With the support of the Navy, this fire could be controlled after about 20 hours. The emergency team rescued at least 25 people in their operations and no casualties were reported in the accident.

The owners of the shops were seen crying, who were watching their shops, which were transformed into ashes due to the fire. Some shopkeepers risked their lives and entered the building to protect the goods.

Sheikh Fayyaz, president of the Hafiz Center Union, said that the fire spread from the second floor of the building to the upper floors and the top three floors were engulfed by this fire while dozens of emergency special vehicles and several fire engines were present on the spot. was. He alleged that Bajwad fire brigade arrived about an hour late after being given information on their behalf.

21/02/2021/7:10:pm
New Delhi: Irda has given a big relief to insurance holders in the midst of the Covid-19 pandemic. IRDAI has now ordered general insurance...

29/11/2020/10:23:pm
Mumbai: Actor Prabhas is currently working with Bhushan Kumar on an epic 3D action-drama, Om Raut-directed 'Adipurush' which revolves around the triumph of good...