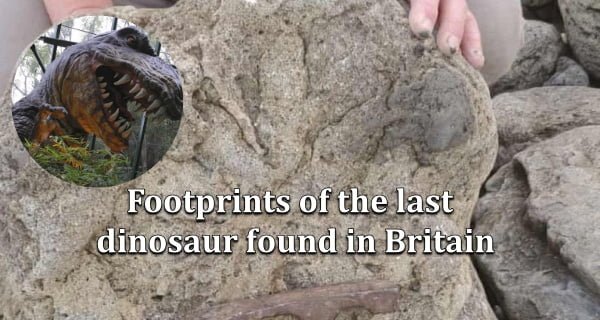 These footprints have been found on coastal areas and rocks at Folkestone, Kent. Here new fossils are discovered continuously due to the impact of rocks and coastal waters due to stormy conditions. David Martil, professor of paleontology at the University of Portsmouth, said: “This is the first time these footprints have been found on a rocky surface called the ‘Folkestone Formation’ and it is a very important discovery because these dinosaurs were the last in the country before extinction.” Will be.” “They were walking close to where the White Rocks of Dover are now.

Next time you go sailing and see these magnificent rocks, just imagine their presence nearby.” The related report is published in this week’s issue of the journal Proceedings of the Geologists’ Association. Some dinosaur footprints are also on display at the Folkestone Museum. Its main author is Philip Headland, a curator with the Hastings Museum and Art Gallery.

Bitcoin reached a new record level, may break record of two years ago

In research claim, 14% of patients recovering from corona are getting new disease

27/05/2021/10:11:am
London: Even though a patient has been cured by Coronavirus infection spread worldwide last year from China, but there is a risk of many...

18/07/2021/11:10:am
United Nations/Geneva: India on Saturday termed as "unfortunate" and "abuse of office" the remarks made by the United Nations Human Rights Expert Group on...