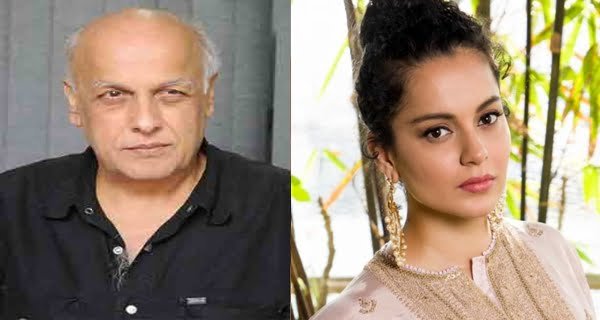 Mumbai: Kangana Ranaut has claimed that when he turned down a film by Mahesh Bhatt, he came to him in violent anger. The film was about a woman who becomes a suicide bomber after being tortured by the police. He said that Mahesh Bhatt almost beat him up. He was stopped by his daughter Pooja Bhatt on the spot.

In an interview to a private TV channel, Kangana said that Mahesh Bhatt had launched her in the film Gangster, okay, I am thankful for this, but it made him call me crazy and psychotic and throw slippers at me.Kangana again said that, Mahesh Bhatt threw a sandal at me.

According to Kangana, Mahesh called her to her editing studio when she was gangster and she was with Bhatt and offered him the film ‘Dhokha’ which stars ‘Heroism of a suicide bomber was the story. Kangana did not believe in the ideology of the film, in which she showed the ‘heroism’ of the suicide bomber. He said, ‘At that time I was 18 years old, yet I had a lot of common sense. Kangana said, “If you are persecuted, there is a lot you can do. You can join the army or police. Why do you have to be a suicide bomber? I did not do that film.

Mahesh did not take Kangana’s decision well and he allegedly ‘screamed’ at her. ‘They were really going to come to me like they were going to beat me with hands or something. His daughter stopped him and called him back and said, Papa, don’t do this. She told that, ‘I somehow survived’.

Kangana further said that, during the trial of the film Woh Lamhe, there was an alleged slipper incident. Kangana claimed that Mahesh did not allow her to attend the screening of her film. He came to the main gate of the theater and he followed me. They shouted at me. I was still trying secretly after that because I wanted to see my film. After this, he threw a sandal at me. Two people took them in.

Nobel Prize in Literature awarded to Abdul Razzaq Gurnah, know who he is

07/10/2021/10:25:pm
Stockholm: The great Tanzanian novelist Abdulrazzaq Gurnah will be awarded the Nobel Literature Prize for 2021. The Nobel Academy announced this today. Gurnah has...

Limit of eight lakh annual income for EWS category will be reconsidered in...

25/11/2021/8:30:pm
New Delhi: The Center on Thursday told the Supreme Court that it has decided to earmark the Economically Weaker Sections (EWS) category of Rs.eaight...

With artificial intelligence, now biggest equation will be solved in a pinch, claims...

29/09/2022/10:36:am
New Delhi: Whenever the name quantum physics comes to the fore, good people lose their sweat. Sometimes physicists have to apply thousands of equations...

Power cuts, Will It Gets Worse Next Month?

29/04/2022/1:55:pm
New Delhi: Amid excessive electrical energy demand because of summers and low coal availability at energy crops, many components throughout the nation are dealing...

31/08/2020/9:14:pm
Abu Dhabi: Two people died in a massive explosion at a restaurant in the UAE capital Abu Dhabi on Monday. police gave this information....

15 countries got a chance in IPL’s mega auction, less than...