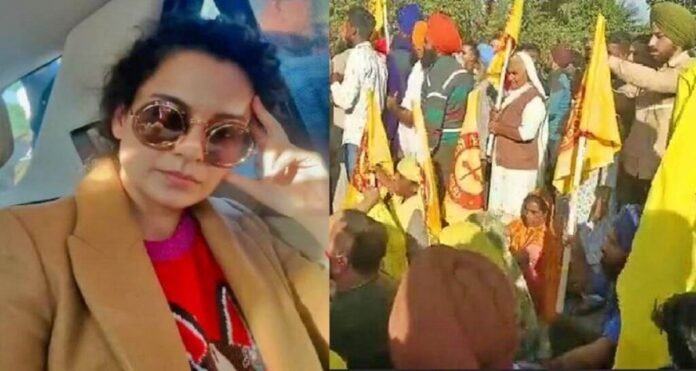 Recently, a few days ago, Kangana had told through her Instagram post that she had received death threats, after which now Kangana lodged an FIR with the police. In such a situation, the actress had recently reached Punjab, but she was stopped by the farmers near Bunga Sahib on the Rupnagar-Kiratpur Sahib road. There, farmers were seen shouting slogans in front of Kangana’s car.

According to media reports, the farmers say that they will not be allowed to go ahead until the actress apologizes for the statements made on her farmers and Punjabis. After which the police also came there but seeing a large number of farmers proved to be insufficient. After which Kangana apologized to the farmers while handling the atmosphere. After which he was given to know from that. Due to this demonstration of the farmers, there was a long jam on the Chandigarh-Una highway. DSP Kuldeep Singh Virk also reached on this occasion.

Significantly, Kangana had given a lot of controversies regarding the farmers’ movement. Due to which many complaints have also been registered against Kangana. Kangana shared a picture on her social media account during the farmers’ movement and wrote – ‘Such people reach the movement with 50-50 rupees.’ After which the actress came under the target of farmers.

02/10/2021/10:32:pm
Washington: Former US President Donald Trump has asked a federal judge in Florida to pressure him to relaunch his account on Twitter. According to...

19/08/2020/9:05:pm
New Delhi: The Supreme Court on Wednesday said that the legitimacy of the investigation into the unnatural death of actor Sushant Singh Rajput is...