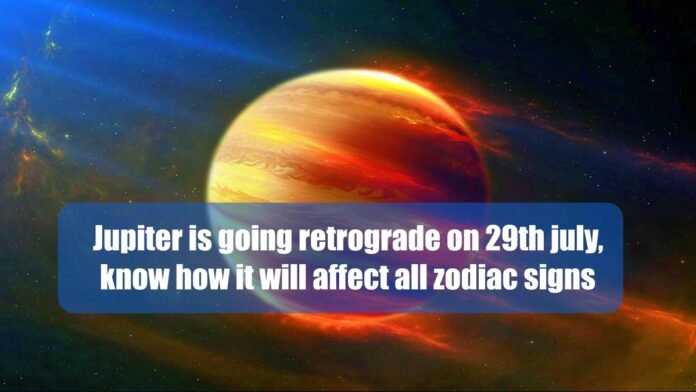 The planet Jupiter is ruled by two zodiac signs, the first sign is Sagittarius and the second is Pisces. Jupiter is exalted in the Cancer sign i.e. when it stays in Cancer, it always gives good magnitude while in Capricorn it is debilitated. Jupiter will move retrograde for the next 5 months while staying in its zodiac sign Pisces. Due to the retrograde movement of Jupiter, a deep impact will be seen on the country and the world, and people of all zodiac signs. There is a possibility of getting good benefits on some zodiac signs when Jupiter is retrograde for the next 5 months.

From Friday, July 29, 2022, to Thursday, November 24, 2022, the planet Jupiter is going to move retrograde in Pisces. What will happen due to this reverse move of Guru, what will be the effect on 12 zodiac signs, and what is the remedy, let’s know.

Remedy: Perform a Yagya related to the planet Jupiter on any Thursday.

Remedy: On Saturday, arrange food and water for the crows.

Libra: The retrograde of Jupiter in the sixth house of your zodiac can prove to be difficult in terms of job and career. Time in business will be average. You will be a little weak financially. There may be a dispute with the spouse. Health will have to be taken care of.

Remedy: Light an oil lamp under a Peepal tree on Thursday.

Remedy: Perform a Yagya related to the planet Jupiter on any Thursday.

Remedy: Perform a yajna for Lord Shankar on Thursday with a priest.

Remedy: On Saturday, feed the sweepers or handicapped people.

Remedy: Chant the mantra “Om Mandaya Namah” with one rosary every day. Otherwise, do it at least 44 times.

07/05/2022/7:33:am
Colombo: Sri Lankan President Gotabaya Rajapaksa declared a state of emergency in the country which will be effective from midnight on Friday. This information...

Delhi and Maharashtra is being unlocked from June 7, know the condition of other...

06/06/2021/10:53:am
New Delhi: In view of the improving situation of Covid-19 in Delhi, Chief Minister Arvind Kejriwal on Saturday announced further relaxation in the lockdown,...

22/10/2020/9:27:am
Patna: The Congress on Wednesday released the party's manifesto for the Bihar Assembly elections. In its manifesto, the Congress has made many enticing promises...

Venus is going to transit in Libra, strong chances of monetary...

Jupiter is rising from March 23, these zodiac signs will have...