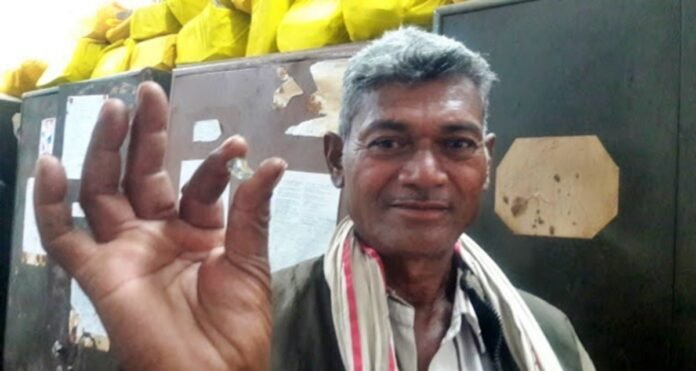 Panna(M.P): The luck of the poor shines, today a tribal has got a big gem-quality diamond from a shallow diamond mine. The estimated price of which is being told is 60 lakhs. In which 6 people are partners, apart from this, another person has also got two diamonds. Diamond connoisseur Anupam Singh of Panna Diamond Office said that 60 years old farmer Mulayam Singh Gond, resident of village Rahunia, has got the biggest precious diamond weighing 13.54 carats which are of gem quality. While Rohit Yadav, a resident of NMDC Colony Panna, has got two diamonds from the Patti diamond mine area itself. One of them is a gem-quality diamond of 6.08 carats while the other is an off-color diamond weighing 4.68 carats.

The happy atmosphere in the house of the poor

For the first time, those poor people were happy to get the diamond. There is a happy atmosphere in the family. Diamond holder Mulayam Singh Gond told that we are 6 people partners in the shallow diamond mine located in Patti. The government lease was made by us on November 10, 21. He told that he has two sons and three daughters, one daughter is married. Both sons study, whatever money I get from Heera, I will use it for the education of my sons. According to diamond traders, the price of a big diamond can be up to 60 lakhs. Apart from this, adding two small diamonds is estimated to be around 10 to 15 lakhs.

13/09/2020/11:37:pm
The famous smartphone maker company Xiaomi has launched a new product in India this time. It is neither a smartphone nor a gadget, it...

What will be an effect on all zodiac signs this new year, Annual predictions...

01/01/2022/8:36:pm
This year there will be the influence of Saturn and Jupiter throughout the year and Jupiter will be in the Aquarius sign. And will...