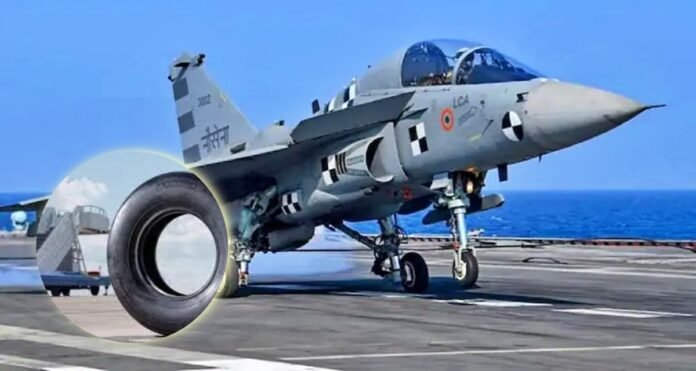 Lucknow: According to the big news of the morning, the wheel of the stolen Fighter Plane Mirage has now been found in Lucknow, the capital of Uttar Pradesh. Yes, the thieves who stole this wheel have returned it. Actually, these thieves say that they did not know at all that this wheel belongs to the fighter plane ‘Mirage’. Those thieves had taken it as a wheel of a truck and stole it. However, after getting the tire, further legal action is going on for the time being.

In this matter, by issuing a statement on behalf of the Lucknow Police Commissionerate, it has also been confirmed that the stolen tires have been found. On this statement, it has been told that two youths have handed over this tire to their officers at BKT Air Force Station. Actually, this tire was stolen from the side of Shaheed Path. A case was registered in this matter on December 1. This tire was stolen by two thieves named Deepraj and Himanshu. Deepraj, Himanshu seems to be in a relationship. After this, both told that on the night of November 26, between 10:30 and 10:45, a tire was found on Shaheed Path, which they had brought home as a truck tire.

On December 3, he saw in the news that the wheel of the Miraj had been stolen, so he expressed concern about the seriousness of the situation. The incident of Shaheed Path was told in the news, so he thought that it might be the same tire. This tire was also a little different. After which both have handed over this tire to the Air Force.

According to the incident, there is a Central Air Command station at BKT, Lucknow. From the airbase here, five tires of the Miraj fighter jet were being sent to the Jodhpur airbase. On the night of November 27, around 2 pm, the trailer attached to the army came out loading the RJ01JA3338 tires.

According to the driver, there was a jam near the SR Hotel on Shaheed Path itself. Then two people who got off a black Scorpio running behind the trailer in the middle of the jam suddenly cut the rope and took off a tire. Here due to the driver Hem Singh jam, he could not catch the car by putting it on the side. Meanwhile, the Scorpio riders left in the blink of an eye. Later, Hem Singh informed the police control room number 112.

What is Health ID card and how will it work, know here how it...

27/07/2021/10:26:pm
New Delhi: The International Monetary Fund (IMF) has cut its previous forecast for the growth of the Indian economy. The IMF has estimated that...

13/08/2020/10:22:am
Damascus: Syrian President Bashar al-Assad's blood pressure suddenly dropped during a speech in Parliament, forcing him to stop his speech for a while. As...