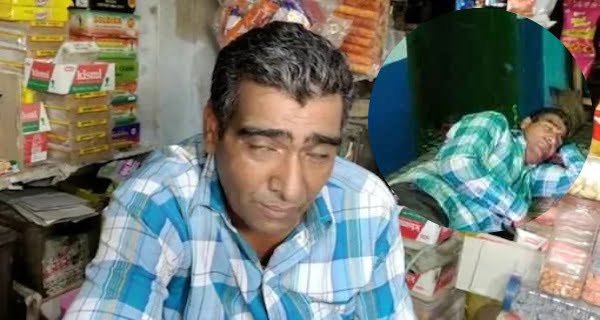 Nagaur: A 42-year-old man from western Rajasthan’s Nagaur district has been dubbed as the real-life Kumbhakarna, the mythological character in the epic Ramayana known for sleeping for six months undisturbed. This name has been given by the villagers of Bhadwa village to Purkharam as he sleeps 300 days a year because he suffers from a rare sleeping disorder known as Axis Hypersomnia. While most people usually sleep for six to eight hours a day or maybe nine hours, Purkharam sleeps for 20-25 days at a stretch once he takes a nap.

According to studies, Axis Hypersomnia occurs due to fluctuation in the protein of the brain that is known as TNF-alpha.

Purkharam was first diagnosed with the rare syndrome around 23 years ago, and since then, the condition has affected his wellbeing and lifestyle. Once he dozes off, it becomes challenging for him to wake up and so his family performs everyday chores for him like feeding and bathing him while he sleeps. Due to his disease, he is able to operate his small grocery shop in the village for just five days a month. And he might even fall asleep while he is at work.

During the initial days of the condition, Purkharam slept for 15 hours a day. Worried about this, his family sought medical help, but his disease could not be cured. By 2015, his condition aggravated and his period of sleep increased by several hours and later by several days.

According to Purkharam, despite taking medications and sleeping excessively, he remains fatigued most of the time and his productivity is almost nil. His other symptoms include severe headaches.

Meanwhile, Purkharam’s wife Lichmi Devi and his mother Kanvari Devi are living in the hope that he will recover soon and start living a normal life like before.

23/10/2020/9:37:pm
Mumbai: Former captain of the Indian cricket team Kapil Dev was reported to have suffered a heart attack. The news has come as a...

15/01/2021/10:13:am
Washington: The newly elected President of the United States, Joe Biden, has taken major steps to bring the American economy back on track. He...

In China, 21 people died due to inclement weather in ultramarathon

23/05/2021/8:52:pm
Beijing: In the northwestern region of China, 21 people died due to hailstorms, icy rain, and storms in the mountain ultramarathon. This information was...