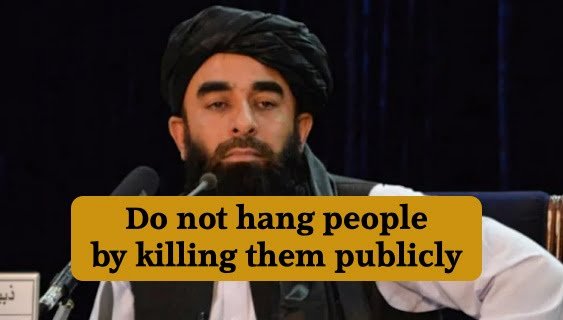 Kabul: In the past, incidents of hanging or whipping of people were seen openly in Afghanistan. The image of the Taliban has suffered a lot after their videos went viral. Although the Taliban government has said several times that it will not do anything like the 20-year-old Taliban regime, recent events tell a different story. In such a situation, the Taliban has given a new decree to the local administration and the fighters. It said that people should refrain from public punishment until the top court of Afghanistan publicly orders the execution.

Taliban spokesman Zabiullah Mujahid said in a tweet, “The Council of Ministers has decided that unless the guilty need to be made public and until a court order issues, no punishment will be given in public.”

Dawn newspaper quoted Mujahid as saying that public hanging and hanging of dead bodies should be avoided until the Supreme Court orders such action. “If the perpetrator is punished, the punishment should be interpreted so that people know about the crime,” the Taliban spokesman said.

Let us tell you that last month the US strongly condemned the Taliban’s plan to reinstate amputation and hanging as punishment in Afghanistan. A US State Department spokesman said the US stood with the Afghan people, especially members of minority groups, and demanded that the Taliban immediately end any such atrocious abuse.

25/10/2021/10:00:am
Taipei: A 6.5-magnitude earthquake struck Taiwan's capital Taipei on Sunday, injuring a woman and damaging a car after being hit by fallen rocks. However,...

If you want to avoid heart attack and stroke, then sleep between 10 to...

20/12/2020/2:10:pm
Tel Aviv: Israeli Prime Minister Benjamin Netanyahu on Saturday administered a vaccine against Coronavirus Vaccine, which was broadcast live on television. Netanyahu is the...