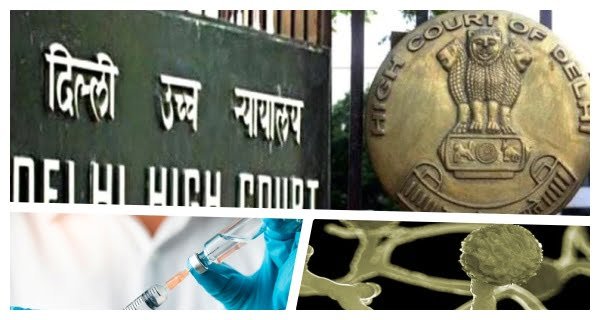 New Delhi: On Tuesday, Delhi High Court reprimanded the Central Government on the case of black fungus and vaccination. The Delhi High Court, while making a strong comment, asked the question that if you do not have a vaccine, then why do you make announcements. The High Court has directed the Center to formulate a policy as to who will be given compensability at the time of shortage of medicines? The High Court has asked to give priority to the youth. The Central Government has filed a status report in the Delhi High Court on the increasing cases of black fungus and the medicines available for treatment, on which the court erupted. The court called the status report vague and the government non-committal.

Actually, the central government got stuck on the figures of the status report filed on black fungus and the high court raised the question. In the status report, the projected figure of medicines was given as 2 lakh 30 thousand? On this, the court directly questioned that how many medicines were given to whom, that is, they were received. Where did this information come from? The court is not at all interested to know from where these medicines were purchased. The court has directed the Center to formulate a policy as to who will be given compensability at the time of shortage of medicines?

The court has also clarified that it is not saying that do not give the vaccine to the senior citizen, but if the vaccine is less, then you should prioritize. Questioning the policies of the Center, the court said that you give SPG protection to the PM because he needs it. Today the country needs youth, so youth should be given priority. The court said that today it has come to their notice that the government has taken steps for the orphan children, but why was it needed after all. The love that children can get from their parents cannot be found anywhere else.

13/02/2021/10:29:pm
London: A media watchdog in Britain has a music video on Khalsa TV (KTV) aimed at indirectly inciting the country's Sikh community to violence...

30/07/2020/7:36:pm
Beijing: There have been more than 100 cases of coronavirus infection in China for the second consecutive day. South Africa has become the fifth...

MPs and their families to have corona test 72 hours before...