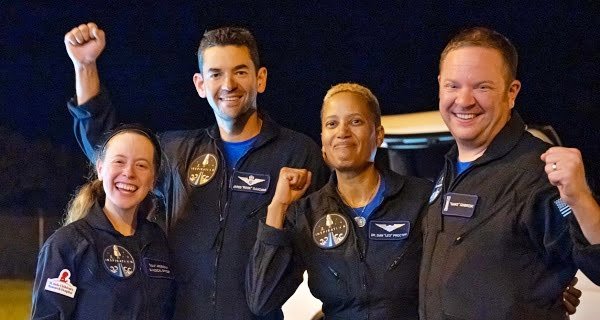 Washington: Inspiration 4X came back to Earth at 4.30 a.m. Indian time on Sunday after being in space for three days. SpaceX’s Dragon spacecraft landed safely in the Atlantic. While expressing happiness, Elon Musk congratulated by tweeting, while SpaceX welcomed the crew members back to Earth and wrote – Welcome Back!

SpaceX tweeted at 3 am on Sunday morning Indian time and said that the weather is good and this crew can comfortably land in the Atlantic Sea. It has now reached its final grade. It will land back near the coast of Florida in the Atlantic Sea at 7:06 p.m. (EDT).

According to the Inspiration4 team, Dragon has a domed window, inspired by the cupola on the International Space Station. The mission of Elon Musk’s company SpaceX is led by tech entrepreneur Jared Isaacman and accompanied by medical officer Haley Arsinaux, a medical assistant and pediatric cancer at St. Jude Children’s Research Hospital, mission specialist Chris Sambrowski, Air Force veteran and Dr. Sean Proctor is an aerospace data engineer and mission pilot.

Inspiration 4X tweeted and informed that the crew members on the mission interacted with the patients of St. Jude Children’s Hospital from space which is amazing in itself.

Inspiration 4 said in one of its tweets, ‘The crew of Haystack Inspiration 4’s first day in space is incredible.

Was! They have completed more than 15 orbits around planet Earth since liftoff and are making full use of the Dragon Cupola,” said Elon Musk, CEO of SpaceX, who spoke with the Inspiration 4X crew. Everything is fine. He traveled around the Earth 5.5 times, completing his first round of scientific research.

Japan: US support Fukushima’s radioactive water to pour into the sea; South Korea may...

13/04/2021/2:45:pm
Tokyo: Japan plans to release more than 1 million tonnes of radioactive water from the Fukushima Nuclear Station into the sea. The government gave...

12/02/2021/8:37:pm
Chennai: A private firecrackers factory exploded in Sattur in Virudhunagar district of Tamilnadu on Friday. In which 11 people have died, more than 36...

Indian government’s fourth strike on Chinese apps in 5 months, ban on more than...