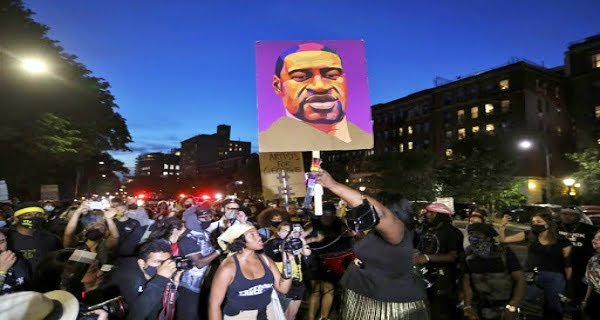 Minneapolis: On Tuesday, the first anniversary of the death of the black George Floyd, who was strangled by a white police officer, people observed a moment of silence, and at the intersection where the incident took place, people held fairs and musical performances in his memory Organized. Floyd’s sister, Brigitte, and other family members observed a moment of silence at a “Celebration of Life” event in a Minneapolis park. Music and food and drink were also organized in this program.

Dozens of people sat for a while on their knees in front of a steel statue a few miles away from the intersection where Floyd was killed. This was done to recall the incident when a black police officer held Floyd’s neck by the knee for nine minutes and 29 seconds. “It was a disturbing year, a very long year,” Bridget told the crowd. “But hardly right, I spent this year,” he said. People say that anything is possible if the one above is with me and I believe in this form of God… today everyone is getting love. Love is here, and so is George. ” Meanwhile, other members of Floyd’s family met with US President Joe Biden and Vice President Kamala Harris at the White House on Tuesday to mourn the loss of a loved one and demand stricter anti-racism laws. There was a moment of silence in New York and a rally in honor of Floyd in Los Angeles. A rally was also held in Germany and events were held in memory of Floyd at the US embassies in Greece and Spain.

The shooting occurred hours after the event was held at the intersection where Floyd was killed in Minneapolis. People were shown fleeing when bullets were fired in the media. One person injured in the incident has been admitted to a nearby hospital, police said. His condition is serious but he is likely to survive, police said. Philip Crother, a journalist present at the scene, said he heard about 30 bullets. Like many other cities, Minneapolis is plagued by rising cases of gun violence. At the intersection where Floyd died, a fair was held on Tuesday. Food and drink, children’s sports, entertainment was everything. In New York, elected officials, including Mayor Bill de Blasio and U.S. Republican physician Jefferies, joined in the silence.

Floyd’s brother, Filinois, told CNAA that he was thinking of George “all the time.” “My sister called me at 12 last night and said that our brother had left us that day,” he said. I think things have changed. I think things are slowly changing but we are moving forward. ” Meanwhile, on Tuesday, the U.S. Senate confirmed the name of Kristen Clark, the first black woman to run for office, as assistant attorney general for civil rights, while Floyd’s family launched a fundraising event. Grants will be given to business and community organizations to “inspire black citizens to success and growth.”

Former police officer Derek Chowin pressed Floyd’s neck with his knee for more than nine minutes on May 25, 2020, killing him. Protests against racism erupted across the country after Floyd’s death and his assassination was condemned around the world. Since this incident, the demand for police reforms has intensified. Chowan was charged with murder last month.