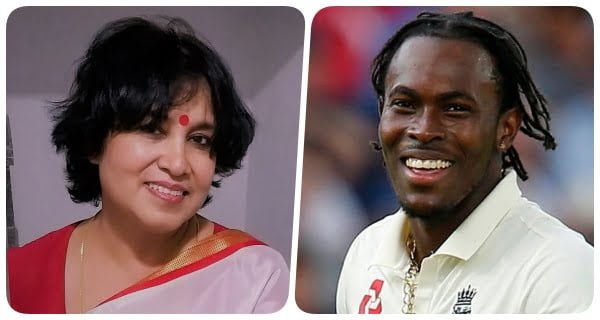 New Delhi: Bangladeshi writer Taslima Nasreen, who has often made headlines through controversies, has made an objectionable tweet about England cricketer Moeen Ali. Moin Ali is a part of Chennai Super Kings in IPL 2021 and he is busy with preparations. Meanwhile, on Monday (April 5), Taslima Nasreen tweeted, “If Moeen Ali had not been playing cricket, he might have gone to Syria to join ISIS.” Immediately after this tweet, Taslima has been fiercely beaten up by England cricketers.

England fast bowler and Rajasthan Royals player Joffra Archer has given a befitting reply to Taslima Nasreen. Archer tweeted, ‘Are you okay? I don’t think you’re alright. ‘ Seeing the escalation of the dispute, Taslima presented her explanation. Taslima said, ‘The haters should know that the tweet on Moin Ali was made in a joking manner. But he made this a point to bother me because I oppose making Muslim society secular and against Islamic bigotry. The biggest misfortune of humanity is that women-advocated leftists support anti-women Islamic fundamentalists.

Archer also reacted to Taslima’s tweet. He wrote, ‘Satire? No one is laughing, not even you, you can at least delete this tweet.

Former England cricketer Ryan Sidebottom advised Taslima Nasreen to delete the tweet. He wrote, ‘I think you need to check whether you feel healthy or not. It would be better if you delete your account itself. ‘

13/08/2020
Damascus: Syrian President Bashar al-Assad's blood pressure suddenly dropped during a speech in Parliament, forcing him to stop his speech for a while. As...

03/07/2020
Giridih(Jharkhand): Neeraj Murmu, a resident of Duliakaram village in Giridih district of Jharkhand, has been awarded the UK's prestigious Diana Award 2020. 21-year-old Murmu,...

02/03/2021
Washington: Two Republican Party MPs have introduced a bill in the House of Representatives calling for the US to restore formal diplomatic relations with...

Will not be able to travel on international flight till 31 August, DGCA took...

31/07/2020
New Delhi: Aviation regulator DGCA has extended the final deadline of Ban on International Flights till 31 August. However, this restriction by the DGCA...

20/06/2020
Bhopal: The animal husbandry department of Madhya Pradesh has described the viral news of spread of corona virus infection in some poultry farms in...