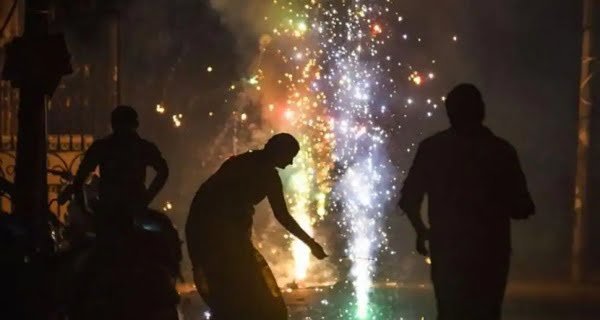 New Delhi: Where due to the tremendous fireworks on the night of Diwali, air pollution has now reached a serious level in many cities of the country. At the same time, no effect of the ban of firecrackers on Diwali was seen as usual this time too and firecrackers and fireworks were burnt fiercely in different parts of the country. Its result remained the same cipher and pollution spread in the sky all around. On Friday morning, many cities of North India were wrapped in a thick blanket of haze. So there people had to face major problems like burning in the eyes and difficulty in breathing. Here in NCR also a thick sheet of haze was seen.

Air pollution due to fireworks in this way in the country

Varanasi: The air became 6 times more toxic
This Diwali the air quality in Banaras was very poor. Air pollution 6 times higher than normal also made it difficult for the people of the city to breathe. On Thursday, the Air Quality Index (AQI) stood at 204, Bhelupur 179, BHU 117, and Maldahiya 225. At the same time, on Friday it was recorded at 227, 230, 256, and 292 respectively. The maximum level of PM-2.5 was 384 on Thursday and 500 micrograms per cubic meter on Friday.

Agra: Now the 5th most polluted city in the country
On the other hand, due to the tremendous fireworks on Diwali, the presence of toxic chemicals in the air of the Taj city reached the highest level. As a result, on Thursday, Agra emerged as the fifth most polluted city in the country. The presence of PM-2.5 particles here also crossed the dangerous level. At the same time, Agra was wrapped in a sheet of mist last Friday morning. The Air Quality Index remained above 400 at 5 major centers in the city.

Punjab: The climate of Jalandhar became the most dangerous
It should also be mentioned that in many cities of Punjab, due to the increase in the level of air pollution, it became difficult for people to breathe here. Jalandhar recorded extremely poor air quality with an AQI of 348. At the same time, the climate of Ludhiana (300) and Patiala (263) remained in the poor category. Chandigarh, the common capital of Punjab and Haryana, had an AQI of 152, which was moderate.

Kolkata: Air quality down in moderate to poor category
Similarly, in West Bengal, incidents of the bursting of firecrackers on Kali Puja have been reported very rarely except in some areas of South Kolkata. Still, Kolkata’s air quality remained in the moderate to poor category. The AQI was recorded at 171 in Bellyganj, 227 in Bidhannagar, 189 in Fort William, 229 in Jadavpur, 146 in Victoria Memorial, and 148 in Rabindra Sarovar.

Jharkhand: Bad air in many cities including Ranchi
On the other hand, due to fireworks on Diwali, the air pollution level in Jharkhand was recorded two times worse than normal, while the noise pollution was up to 45% higher. In cities like Jamshedpur, Hazaribagh, Dhanbad, and Dumka, the air got suffocating.

16/04/2021/10:33:pm
Washington: Washington (Goggle) CEO Sundar Pichai has announced the introduction of the 'Timelaps' feature in Google Earth. This is the biggest update since...

23/09/2020/11:06:pm
Guwahati: Assam is struggling with the outbreak of African swine flu. Chief Minister Sarbananda Sonowal on Wednesday ordered the killing of about 12,000...