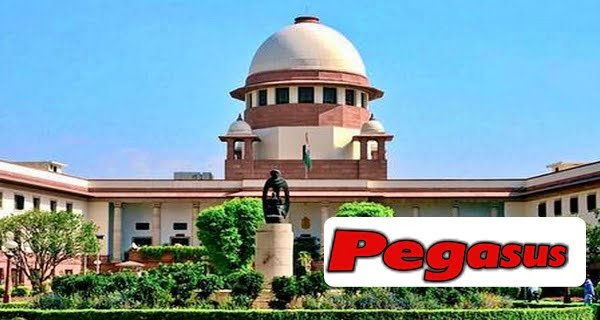 New Delhi: The Center on Monday informed the Supreme Court that it does not want to file a detailed affidavit on petitions seeking an independent probe into the alleged Pegasus espionage case, prompting the top court to say it only wanted to know whether the Center has used it or not, Pegasus software was used illegally for alleged spying of citizens? Taking note of the Centre’s stand amid concerns of privacy breaches by journalists and others, the Supreme Court said it would pass an interim order on the issue. Also reiterated that the court is not inclined to seek information on any matter related to national security.

Noting that the Centre’s stand has come to the fore through detailed affidavits, a bench of Chief Justice NV Ramana, Justice Surya Kant, and Justice Hima Kohli asked Solicitor General Tushar Mehta to continue to speak on national security before the court in rejoinder arguments. Reiterating your argument.

The bench said, “There is a procedure established under the law which also allows listening to the phone. We needed your affidavit to understand your stand. We don’t want to say anything more than this.”

The bench also said that if the government uses any espionage software, it should be in accordance with the procedure established under the law. The bench told Mehta, “We are reserving the order. An interim order will be given which will take two to three days. If you think about it again, you can refer the matter to us.”

The Supreme Court told Mehta that if the government re-considers filing a detailed affidavit in the matter, he can mention the matter before the court.

The bench told Mehta, “We were expecting only a limited affidavit as we have petitioners before us who say that their right to privacy has been violated by A or B agency. Would you like to know whether this has been done or not? National security is not a part of the present proceedings.” “We reiterate that we also do not want any security and defense-related issues to be placed before us,” the bench said.

During the nearly hour-long hearing through video conference, the Center told the bench that it does not want to file a detailed affidavit. Solicitor General Tushar Mehta told the bench that whether the government has used any particular software or not is not a matter of public discussion. He said that it would not be in the national interest to make related information a part of the affidavit. Mehta said the report of the committee of experts would be placed before the court.

He said the government has nothing to hide and that is why it, on its part, said that it would constitute a committee of experts in the field to probe the allegations. To this, the bench told Mehta that it has already been clarified that he does not want the government to disclose any information which endangers national security.

“You (Mehta) are saying time and again that the government does not want to file the affidavit. We also do not want any security-related issues to be placed before us. You said a committee would be formed and the report would be filed. We have to look into the whole issue and pass an interim order.”

The bench also referred to the earlier statement of former Information and Technology Minister Ravi Shankar Prasad in which he had allegedly accepted the report of spying through Pegasus spyware. To this, Mehta referred to the statement of Information Technology Minister Ashwini Vaishnav in Parliament in this regard, in which Vaishnav had said that such news coming out before the monsoon session cannot be mere coincidence.

Meanwhile, senior advocate Kapil Sibal, appearing for senior journalists N Ram and Shashi Kumar, submitted before the bench that the government cannot ask the apex court to “close its eyes”. “It is unbelievable that the central government says we will not tell the court,” Sibal told the bench.

Sibal said, “The government cannot ask the court to close its eyes. Can’t say that we will do what we want and we will do it through an internal investigation.” Also said that it is the duty of the government to make its citizens aware of the factual position of the issue. The Center has said that the government will constitute a committee of experts to remove any misconceptions spread by certain vested interests and to examine the issues raised. The Supreme Court on September 7 granted the Center some more time to file its reply while hearing several petitions seeking an independent probe into the alleged spying of certain individuals in the country through the Israeli spyware Pegasus. Was and said that the court will now hear the matter on September 13. Then, Solicitor General Tushar Mehta, appearing for the Centre, had submitted that due to some difficulties, he could not meet the authorities concerned for the decision regarding filing the second affidavit and requested to list the matter on Thursday or Monday.

The Centre, earlier, had filed a brief affidavit in the apex court and said that the petitions seeking an independent probe into the Pegasus espionage allegations were based on “conjectures or other unverified media reports or incomplete or unconfirmed material”. are held. The apex court, while issuing notice to the Center on August 17 in this matter, had said that it does not want the government to disclose any information related to national security.

The court had asked the Center what is the problem if the competent authority files an affidavit before it on this issue. To this Mehta had said, “Our well-considered reply is the same as what we said in our previous affidavit. Please look at the matter from our point of view as our affidavit is sufficient. The Government of India is before the Supreme Court of the country.”

Mehta had also said that if the government of any country makes public information about users or not using software, then those already involved in terrorist activities can take measures.

The petitions pertain to reports of alleged spying by government agencies of eminent citizens, politicians, and journalists through Israel’s spyware Pegasus. An international media organization had said that more than 300 Indian mobile phone numbers were listed as potential targets for surveillance using Pegasus spyware.

More than 7 thousand cases of Black fungus in India

21/05/2021/10:42:pm
New Delhi: The second wave of Coronavirus is spreading with debilitating Covid patients, another deadly disease. So far, more than 7 thousand cases of...

20/08/2020/11:15:am
New York: Facebook's Chief Operating Officer Sheryl Sandberg has stated that US President Donald Trump's post will be removed if he violates company policies...

27/05/2021/9:22:pm
There are many animals around the world whose species have become completely extinct and some animals are on the verge of extinction. The only...