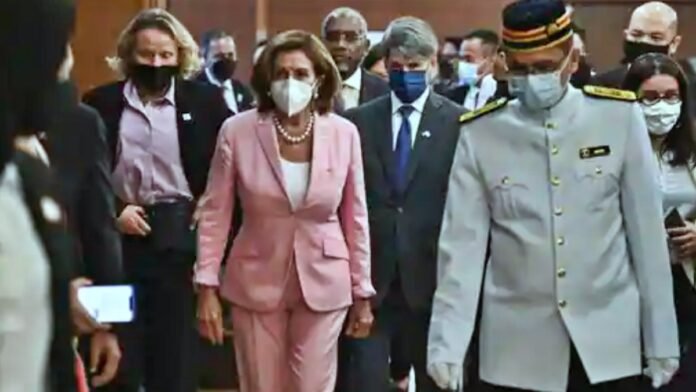 The Speaker of the US Congress (Parliament) Nancy Pelosi visited Taiwan, regardless of the heavy tension between China and the US. She addressed the parliament there and the promise that Taiwan had made 43 years ago to stand with Taiwan, which is still abiding by it. America is with it every moment and is proud of that Taiwanese friendship. China got irritated, scorched, and kept staring. With the security of the fighter planes, Nancy completed her mission of traveling to Taiwan, which was a tremendous challenge for China.

The old name of Taiwan was Formosa. When the Communist forces (People’s Republican Army) occupied China under the leadership of Mao Zedong, Chiang Kai-shek, the popular leader of China, had to flee China with his two million soldiers and come to Formosa. Taiwan’s government has been anti-democratic and anti-communist since its inception. China repeatedly asserts its rights over Taiwan, but it could not do anything due to Taiwan being protected by America. In almost 7 decades, Taiwan has also increased its military power significantly. In the Pacific, Taiwan remains the glare of China’s eyes. As Taiwan increases contact with other countries, China becomes deeply irritated.

US speaker visits after 25 years
In 1997, the then speaker of the US Parliament visited Taiwan. After 25 years, Nancy Pelosi went there on a two-day tour. China had warned America of dire consequences, yet Nancy, sure of her intentions, made this trip. She has been a sharp critic of the Chinese Communist Party. He referred to the massacre of pro-democracy students at Beijing’s Thian Aan Men square and assured US support to protect human rights.

The effects of the Chinese threat
Frightened by Nancy’s visit to Taiwan, China stopped sea and air routes around Taiwan and started a military drill that would last for 4 days. In the future, if China thinks of attacking the Taiwan-controlled Kinmen and Matsu islands, then tensions can flare up. China knows that when Russia could not get success in attacking Ukraine, then Taiwan also has Air Force, Navy, and Army, and modern weapons. Also, there is full cooperation and support of America. America challenges China on the pretext of Taiwan.

America accused of breach of promise
In the 1979 joint declaration of China and the United States, the United States stated that it recognized the People’s Republic of China as the only legitimate government of China. It will maintain only cultural and commercial ties with Taiwan. China alleges that the US is no longer able to live up to the promise of the One China policy. He is creating more tension in the Pacific with such steps. In such a situation, China will not sit silently. America should follow the ‘One China’ principle. Taiwan is an integral part of China. 140 crore Chinese will defend their sovereignty.

Last week, Chinese President Xi Jin Wing warned the US against taking unilateral steps in relation to Taiwan and said that those who play with fire perish.

Weekly cases of monkeypox increased by 77%, and more than 6000 cases worldwide: WHO

07/07/2022/9:24:pm
GENEVA: The World Health Organization (WHO) has said a 77 percent weekly increase in the number of confirmed cases of monkeypox in laboratories has...

Thousands on strike in protest against racial inequality in America

After India’s big win against Scotland, what opened the way to the semi-finals? read...

Taiwan’s strong message to China, it is an independent country and...

Omicron will become the natural vaccine of Corona, the epidemic will...

NATO to extend dimension of response forces in Europe...