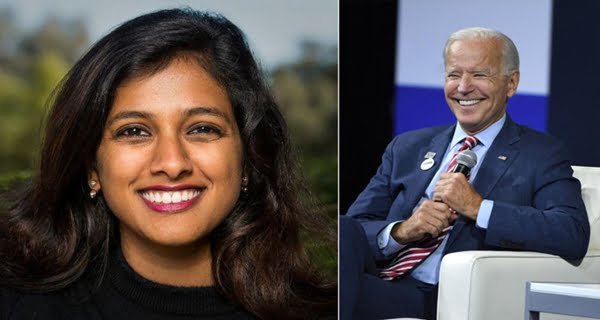 Washington: Democratic Party candidate Joe Biden has nominated Indian-American Medha Raj as his digital chief of staff for the presidential election in the US. This position is very important in his election campaign, which is being run completely digitally due to the Kovid-19 global epidemic. Biden’s election campaign said Raj would work on all aspects of the digital department and coordinate to make the impact of digital results more effective. Raj said on LinkedIn, “I am excited to share that I joined Joe Biden’s campaign as Digital Chief of Staff.

There are 130 days left in the election and we will not waste even a minute. ” His taluk was from the campaigning of Pete Butigge, who now supports Biden. The CNN news channel said that this coronavirus is part of an effort to make the campaign almost entirely digital due to the global epidemic. According to CNN, Clark Humphrey, who worked on Hillary Clinton’s election campaign in 2016, will be the new digital deputy director of the Biden campaign to raise funds from the public. Jose Nunez will be the new digital organizing director of the campaign. He has been associated with Kamala Harris’s election campaign. Christian Tom will be the new director of digital partnerships. For the past few months, Biden has been trying to raise funds through more and more digital campaigns and through online channels.

19/06/2022/10:24:am
London: Indian-origin architect and design advocate Narita Chakraborty has been appointed as the prestigious commissioner of Historic England. Historic England is the public body...

No Diwali party this time at Amitabh Bachchan’s house, know the reason behind it

22/10/2022/10:00:am
Mumbai: The festival of Diwali has come very close. People have already prepared for it. After the Corona Pandemic, this year there will be...

17/11/2020/10:51:am
New Delhi: Cases of coronavirus infection are declining in the country, but rising cases in some states are raising concerns of the Union Ministry...