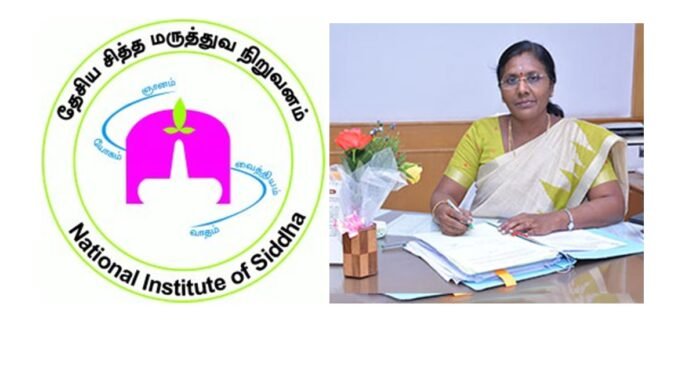 Chennai: The National Siddha Institute (NIS) claimed to have successfully treated 160 Kovid-19 patients in the city in a short span of time and urged the Tamil Nadu government to hand it over to all Kovid-19 care centers in Chennai. So that Siddha doctors can start treating patients. The NIS, which comes under the Union Ministry of AYUSH, has claimed that 160 people have been cured within five days. He is confident that the spread of corona virus in Chennai will reduce and the city will be transformed into a safe zone in a few days.

A top official said that NIS has requested the state government to hand over all the Kovid-19 care centers in the city to the institute so that the proven doctors can start their treatment. The institute, through its pilot study on the use of traditional systems of medicine, has proven a mixture of three effective medicines and is ready to use a mixture of these medicines to prevent the spread of the virus and treat the infected.

NIS director Meena Kumari said, “We have come up with three different effective blends of Siddha after extensive research. “He said that the cost of treatment is modest compared to corporate hospitals and all the medicines of Siddha are available locally. He claimed, “We have asked the state government to hand over all the Kovid-19 care centers to us so that all the patients can be treated. Siddha’s medicine can cure a patient infected with the corona virus in three days. “His belief is based on the fact that Siddha doctors have successfully treated 160 patients. Apart from this, 23 patients have also been treated in Puzhal Central Jail.

He claimed that all these patients became infection free in five days of treatment and their test report came back negative. Dr. Meena Kumari said that the medicine will help in treating the infection of the patient in three days. She is a member of the National Task Force setting guidelines for treatment protocols. He said that NIS is set to begin clinical trials in three days. Meanwhile, the Central Research Council in Siddha has sent a proposal to the state government urging the inclusion of traditional medicine in the treatment protocol in government Kovid-19 care centers.

About The National Siddha Institute (NIS)

The National Institute of Siddha is located at Grand Southern Trunk Road, Tambaram Sanatorium, Chennai and functioning in its own campus, situated on a plot of land measuring 14.78 acres. The Ayothidoss Pandithar Hospital attached with Institute is a NABH accredited Hospital, providing healthcare services to the public and is imparting clinical training to the Post Graduates. TThe OPD and IPD, with its 200 bed strength are functioning on all the 365 days of the year. In addition NIS conducts Five outreach OPDs at different places in and around Chennai in the Semi-urban and Rural areas (Swasthya Rakshan & Swasthya Parikshan) and one Peripheral OPD at Tribal area, Kothimangalam, Thirukazhukundram, Kancheepuram district.

Ban on New Year’s celebration, some countries made new rules due to ‘Omicron’

28/12/2021/9:31:pm
Brussels: Ahead of the new year, the new form of the coronavirus 'Omicron' is discouraging people and countries are taking different steps to deal...

Innova Crysta will not available now? Toyota removed it from website!

27/12/2022/10:24:am
New Delhi: Toyota company is continuously launching its powerful cars one after the other. People like the cars of this company a lot because...

06/12/2020/5:03:pm
Indore: The leaders of Madhya Pradesh are also following the path of Uttar Pradesh Chief Minister Yogi Adityanath. After discussions of changing the names...