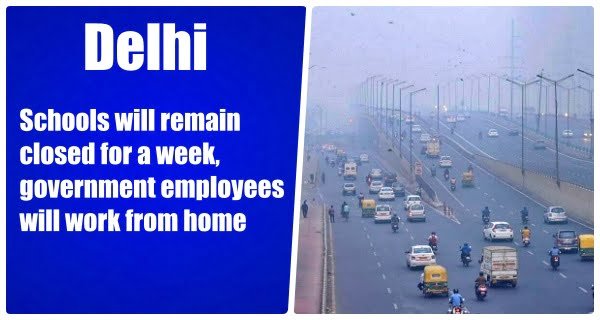 New Delhi: Due to the increased pollution in the capital Delhi, the situation has become critical. The Air Quality Index in Delhi has crossed 550. In view of the increasing pollution in the city, Chief Minister Arvind Kejriwal has made a big announcement on Saturday. All schools in Delhi will be closed for the coming one week, all government employees will work from their homes.

In view of the increasing pollution in Delhi, the Delhi government had called an emergency meeting. In this meeting, the Chief Secretary of the state including all the cabinet ministers attended. Addressing reporters after the meeting, Kejriwal said, “Schools will remain closed for a week from Monday. To continue virtually so that children do not have to breathe polluted air. During this time only online studies will be done. Also, all construction activities will not be allowed inside Delhi between November 14-17.

The Chief Minister said, “Government offices will operate from home (WFH) at 100% capacity for a week. An advisory will also be issued to private offices to adopt the option of working from home as far as possible.”

During immersion of Durga statue in Munger, commotion police vehicles were blown up,...

29/10/2020/9:50:pm
Munger: The shooting that took place during the immersion of Durga idol in Munger and the case of baton charge by the police on...

21/11/2020/10:31:am
Ambala: Haryana Health Minister Anil Vij was given a trial dose of the corona Vaccine, a home-grown vaccine to prevent coronavirus, here on Friday....

15/07/2020/11:13:am
New Delhi: Even though Apple and Samsung are competing with each other in the smartphone market, you might not know that Apple buys displays...