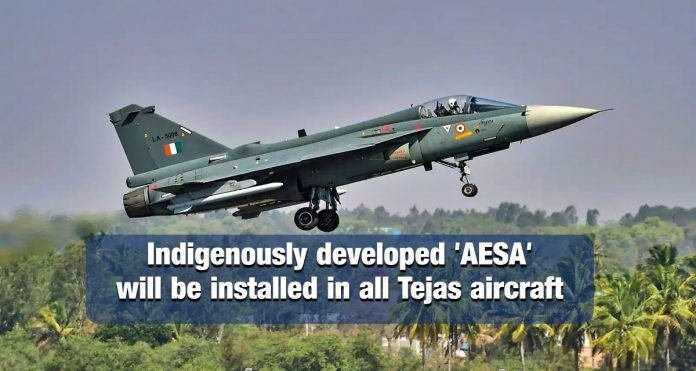 New Delhi: The Indian Air Force is about to demonstrate an indigenously-developed Radar – Active Electronically Scan Array (AESA). After the induction of radar in the Air Force, India will be among the few countries in the world that have a force multiplier that can counter electronic warfare, long-range missiles, and guided ammunition. This was confirmed by D Seshagiri, Project Director, Electronics and Radar Development Establishment (LRDE). He said that AESA radar is 95% indigenous. It has only one imported subsystem. It can track 50 targets in the sky over a range of more than 100 km and engage four of them simultaneously. According to the English newspaper Hindustan Times, in the next five years, all 83 fighter planes of Tejas of the Air Force will have this radar. The future twin-engine AMCA fighter developed by the Aeronautical Development Agency (ADA) will also have these radars.

According to Seshagiri, the AESA radar will be mounted on the radar cone of Su-30 MKI aircraft as well as the Indian Army’s carrier-based MiG-29K fighters. He said that “already, LRDE has signed a Memorandum of Understanding with Hindustan Aeronautics Limited to be the principal integrator of radar on Tejas Mk IA, a supplier of four vendor subsystems including BEL,” he said, according to the newspaper report. ‘

This radar will be installed in all 83 Tejas aircraft
According to the newspaper, the initial 16 Tejas Mk 1A aircraft will be equipped with the Israeli ELM 2052 AESA radar and the rest will be equipped with the indigenous AESA radar. Seshagiri said, “Radar trials have already been conducted on two Tejas fighter jets as well as Hawker Siddeley 800 executive jet for over 250 hours. The radar, along with the Force Multiplier ready for production, will eventually be demonstrated in a flight this month. As of now, the US, EU, Israel, and China have AESA radar capability.

The IAF-run National Flight Testing Center has already given the go-ahead to the radar after successful demonstration trials. Earlier, India was using primary radars on its fighter planes as well as aircraft with indigenous aerial warning and control systems. If Indian fighters had AESA radars on intercepting fighter planes in February 2019, the Pakistani Air Force’s retaliation for the Balakot attack would have been even more lethal for Islamabad.

Diplomatic relations between Bahrain and Israel to be normal, Trump mediated

12/09/2020/10:56:am
Washington: US President Donald Trump has entered into a peace agreement with Bahrain in West Asia and has announced that it will help normalize...

27/09/2021/8:21:pm
Chennai: Customs officials on Monday recovered around 1,588 grams of gold brought from Dubai and Kuwait at the airport here. Officials said that the...

28/06/2021/9:56:am
Washington: The US launched airstrikes on Sunday targeting "bases used by Iran-backed militia groups" near the border between Iraq and Syria. Pentagon press secretary...

19/09/2020/8:09:pm
New Delhi: On the input of a Central Intelligence Agency, freelance journalist Rajiv Sharma (Rajiv Sharma), who hails from Pitampura, was arrested on 14th....