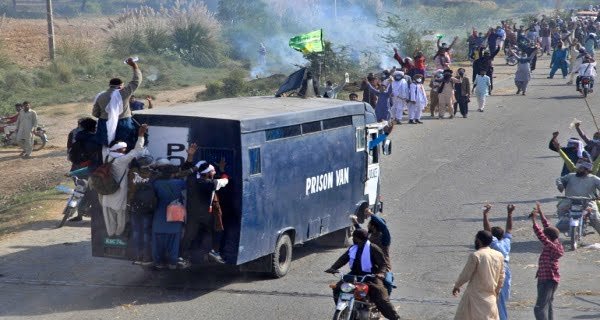 Islamabad: In Pakistan, the conflict between the government and the banned organization Tehreek-e-Labbaik Pakistan (TLP) is increasing. TLP Islamabad has started a march for 4 demands including the release of a radical leader. The workers of Lubbak have reached Muridke camp. Islamabad is just 14 kilometers away from here. So Islamabad has been sealed from all sides. Internet service has been stopped in three cities.
In the violence that took place in Gunjarwala on Wednesday, 4 policemen were killed, while more than 250 are said to be injured. The TLP has made it clear that if the government tries to stop it through the police or other security forces, then there can be large-scale violence and the government will be responsible for it.

What is the demand for TLP?
TLP’s first demand is for the release of radical leader Saad Rizvi, who has been in jail for six months. The government has agreed to this. The Imran government also says that the ban on TLP will also be abolished and its people will also be released, but the TLP is adamant on the demand to remove the French ambassador. But the government is not ready for this.

The controversy escalated over the French ambassador
The government says that if this is done, then the country will have to face its serious consequences. European countries will turn against Pakistan. GSP plus status will be gone and it will be difficult for Pakistanis to go to Europe. On the other hand, TLP is not ready to bow down. The TLP says that the French ambassador should be expelled from the country in the case of the sacrilege of the Prophet.

TLP was made in 2017
TLP was founded by Khadim Hussain Rizvi in ​​2017. He was an employee of the religious department of Punjab and was a cleric at a mosque in Lahore, but in 2011, when Punjab Police guard Mumtaz Qadri assassinated Punjab Governor Salman Taseer, he openly supported Qadri. After which he was expelled from the job.

When Qadri was convicted in 2016, the TLP launched nationwide protests over issues of blasphemy and the ‘honor’ of the Prophet. Khadim had advocated to blow up France with atom bombs. Khadim Rizvi died in October last year. After the death of Khadim Rizvi, his son Saad Rizvi took over the TLP.

27/05/2021/3:49:pm
Burhanpur: A strange incident occurred in Burhanpur, Madhya Pradesh on Wednesday. Due to the speed of the train, it vibrated and the railway station...

The heat of March sets a record, the third-warmest month in 121-year history

05/04/2021/9:31:pm
New Delhi: The Meteorological Department has said that the month of March has been historically hot. According to the department, this March is the...