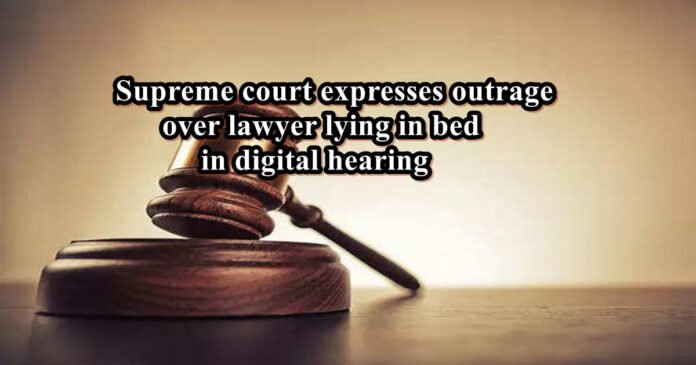 New Delhi: During the digital hearing in the Supreme Court, a lawyer appeared on the bed and wearing a T-shirt to which the judge expressed displeasure that “minimum courtesy of the court” should be observed keeping in mind the public nature of the hearing. The Supreme Court said that lawyers appearing in lawsuits through video conference should be “presentable” and refrain from showing photographs which are not suitable.

Justice S Ravindra Bhat accepted the lawyer’s apology in this regard. The lawyer apologized and told the court, “It is inappropriate to appear in court wearing a T-shirt and lying on the bed”. The court, in its order dated June 15, said, “The court believes that when a lawyer is present in a court hearing through a video conference, he should be eligible to appear and refrain from showing photographs which are not suitable and which Their homes can only be tolerated within the purview of privacy. ”

The Supreme Court said, “We are all going through difficult times and hearing by digital courts has become part of the routine. Considering the public nature of the hearing, minimal courtroom practices should be followed in terms of decent dress, video background. ” The incident occurred when the apex court was hearing a plea seeking transfer of a case pending in a family court of Rewari in Haryana to the competent court in Jehanabad, Bihar. A similar incident came to light in April this year when a lawyer appeared in a video conference hearing wearing a vest, which the Rajasthan High Court had resented.

Now these Corona vaccines will be available in India as well, know the price...

14/04/2021/9:01:pm
New Delhi: To speed up vaccination in the country, the anti-corona vaccine manufactured abroad has now been approved for import into India. Vaccines that...

Customers will have to re-update KYC, not have to visit bank

Corona furor in South Korea, record deaths due to infection

15/02/2022/8:44:pm
Seoul: South Korea recorded the highest number of deaths in the last month due to coronavirus infection on Tuesday. In view of the increasing...

WHO: Political and religious programs are the cause of increasing cases...

7 changes in rules related to foreign funding, convenience to common...

3.6% of corona patients hospitalized had fungal or bacterial infections: ICMR...