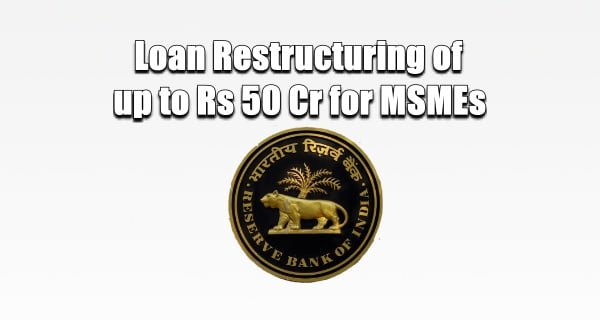 New Delhi: In a bid to provide relief amid the second wave of COVID-19 pandemic, the Reserve Bank of India (RBI) announced doubling of loan restructuring limits for micro, small and medium enterprises (MSMEs) and small borrowers to Rs 50 crore. “With a view to enabling a larger set of borrowers to avail of the benefits under Resolution Framework 2.0, it has been decided to expand the coverage of borrowers under the scheme by enhancing the maximum aggregate exposure threshold from ₹25 crore to ₹50 crores for MSMEs, non-MSME small businesses and loans to individuals for business purposes,” Shaktikanta Das, governor, Reserve Bank of India announced on Friday.

Eligibility
Borrowers having aggregate exposure of up to ₹50 crores and who has not availed restructuring under any of the earlier restructuring frameworks (including under the Resolution Framework 1.0 dated August 6, 2020), and who were classified as ‘standard’ as of March 31, 2021, shall be eligible to be considered under Resolution Framework 2.0, the central bank mentioned.

The newly announced benefits can be availed by

1) Individuals who have availed of loans and advances for business purposes and to whom the lending institutions have aggregate exposure of not more than ₹50 crore as on March 31.

2) Small businesses, including those engaged in retail and wholesale trade, other than those classified as MSME as on March 31, 2021, and to whom the lending institutions have aggregate exposure of not more than ₹50 crore as on March 31.

Last day for applying loan-restructuring
Banks and lending institutions can invoke restructuring under the proposed framework till September 30. The loan moratorium needs to be implemented within 90 days after invocation.

“The expansion of the Resolution framework 2.0 from Rs 25 crore to Rs 50 crore will extend the credit coverage to a higher number of individuals and businesses. Considering the significant contribution of MSMEs to GDP, the relief measures will catalyze MSME recovery and further stimulate financial stability in the economy,” said Shachindra Nath, executive chairman and managing director, U GRO Capital.

“The enhancement in limit for restructuring of loans by banks to Rs 50 crore from Rs 25 crore are welcome moves to support MSMEs. We expect that the steps announced would increase consumer demand and aid incremental economic activity,” said Rajee R, chief ratings officer, Brickwork Ratings.

15/10/2020/9:47:pm
Mumbai: Bollywood's Bhaijaan Salman Khan has finished shooting for his upcoming film Radhe. Giving information about this, the filmmakers have shared a video. In...

22/12/2020/9:03:pm
Jerusalem / Dubai: Senior industrialist Ratan Tata was conferred with the prestigious 'Global Visionary of Sustainable Business and Peace' award by the Federation of...

28/09/2020/8:39:pm
Dubai: In view of the growing case of Corona Virus in Dubai, the administration has announced a new ban on bar and restaurant services...