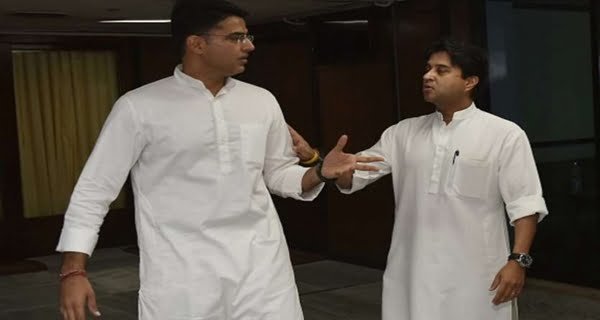 New Delhi: In the political drama of Rajasthan Congress, Jyotiraditya Scindia, an old Congressman, has been entered. Scindia justified the displeasure of Sachin Pilot and said that talent is not valued in the Congress. He recalled his old colleague and said, ‘I am sad to see Sachin Pilot also being sidelined and persecuted by Rajasthan CM. It shows that the Congress has no talent and talent. Scindia left the Congress and joined hands with the BJP in the past. There is speculation that the BJP may put Pilot on its side like Scindia.

It is difficult to save the chair for Gehlot
The displeasure of Deputy CM Sachin Pilot has posed a threat to the Ashok Gehlot government. Pilots, who are in Delhi themselves, are adopting rebellion with 23 to 24 MLAs. There was a tussle between the two leaders since the formation of the government, which may have reached the peak now. Many Congress leaders have requested the high command to intervene. The BJP is saying that this is an internal pull of the Congress in which it has no role. But the way the party dropped Scindia in Maharashtra, the Kamal Nath government. Similarly, the Gehlot government can be collapsed by including the pilot.

Those two notices, which increased the crisis
In Rajasthan, there was a case for allegedly bribing MLAs to bring down the Congress government. In this, the Special Operation Group (SOG) took out two notices simultaneously. One notice to Chief Minister Ashok Gehlot and the other to Deputy Chief Minister Sachin Pilot. Both were asked to record the statement. The Additional SP of SOG gave these notices on 10 July, in which they said that they want to record the statement of the pilot under Section 160 of CrPC. On this matter, Gehlot tweeted on Sunday, clarifying, “The Congress had complained that the BJP is trying to woo the MLAs through money, on which the SOG made statements to the Chief Minister, Deputy Chief Minister, Chief Whip and some other ministers and MLAs. Notices have been given for lodging. But some media institutions are distorting the facts. “

Rar in Rajasthan Congress, what will happen to Gehlot? BJP in waiting

Congress sources say it has the support of 116 MLAs, while the BJP has 72 MLAs. But if Pilot decides to leave the Congress, more MLAs may join him. Pilot claims that he has the support of around 25 MLAs and about 20 are in various places in Delhi-NCR.

13/10/2021/1:54:pm
Athens: A strong earthquake has jolted the Greek island of Crete, three weeks after another temblor killed a man on the island and damaged...

Lockdown implemented as cases of ‘Corona’ increase, hundreds of people protested in Netherlands

15/11/2021/9:55:am
Utrecht: A large number of protests took place in the northern city of Utrecht after the lockdown was implemented amid increasing cases of Coronavirus...

Imran Khan’s advisor threatens – if you do not pay tax, you will not...

09/11/2021/10:20:am
Islamabad: A statement by Shaukat Tarin, the financial advisor to Pakistan's Prime Minister Imran Khan, has created a controversy in the country. Tarin says...

The Congress party may soon get a full-time president, in the...