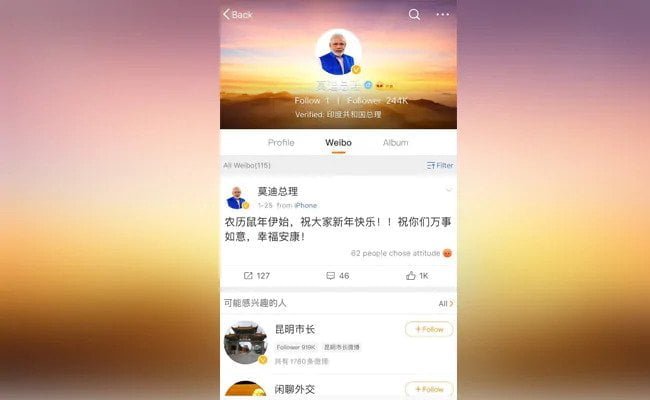 New Delhi: Amid deepening border dispute with China, Prime Minister of India Narendra Modi has removed his account from the micro-blogging Chinese app Weibo. This app was joined by PM Modi in the year 2015. Weibo is also included in the list of 59 apps that have recently been banned by the Indian government. Now all the posts uploaded in PM Modi’s account on this app have also been deleted.

Special rules to delete VIP account
Significantly, some special rules have been made to remove VIP accounts on the Weibo app. It is being said that there was a delay in giving permission from the app to remove this account. So far 115 videos were posted by PM Modi on this app. After mutual consent, it was decided that all these posts would be deleted. After much efforts, only 113 videos could be deleted. But now all the posts have been deleted.

There were problems in deleting two posts
Two posts that could not be deleted were the photo of PM Modi and Chinese President Xi Jinping. It is being said that it was not possible for Weibo to delete the photo of its President. This is the reason why both these pictures were still visible on PM Modi’s account. PM Modi has 2 lakh, 44 thousand followers, on this account.

25/09/2021/10:19:am
World Pharmacist Day is celebrated every year on 25 September across the world to celebrate and recognize the important role of pharmacists in our...

SBI launches YONO branch, will be able to deposit cash for seven days

20/08/2020/10:53:pm
New Delhi: Cricketer Rohit Sharma is among the 4 athletes who have been recommended for India's highest sporting honor, the Rajiv Gandhi Khel Ratna...

09/08/2020/6:32:pm
New Delhi: There is no fresh Covid-19 investigation of Union Home Minister Amit Shah. This information was given by an official on Sunday. This...