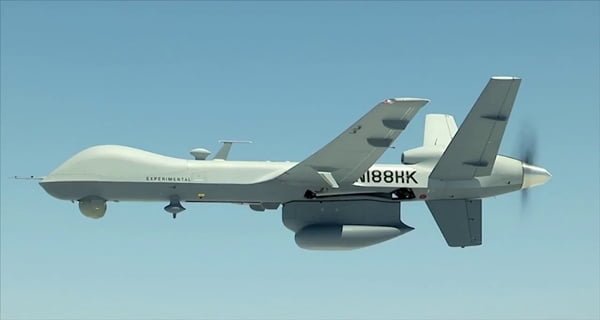 New Delhi: The deadlock between India and China on the Line of Actual Control (LAC) in eastern Ladakh continues. Till now, there has been no result of a dialogue between the two countries. Meanwhile, there is news that India has expressed its desire to buy Predator-B Drone from the US, given the current situation on the border. This is a drone that not only gives intelligence but can also attack any target with a missile and laser-guided bomb. It is being said that using this, the US had piled Iranian commander General Qasim Sulemani.

Talks are going on with America
According to the news, the US has offered to sell 30-c Guardian to India. Its price is around four billion dollars. But the current situation on the border, India feels that it would be better to use the same drone for both surveillance and target attack, and Predator-B drone can do both. Both the Indian Navy and the Army are negotiating with the US for this deal.

It is being said that America is ready to give Predator-B drones to India, but the US is a bit annoyed with India these days on the issue of arms deal. According to sources, America’s resentment is about why India bought the S-400 missile system from Russia. The US fears that the surface-to-air missile system can reach Moscow from India. Let us know that China has already taken S-400 missile from Russia.

Why did India need it?
These days India is using Israeli heron drone in Ladakh. These drones are without weapons. While China has a Wing Loong II drone, which carries dangerous weapons. China is also ready to give this drone to Pakistan. Pakistan Air Force has tied up with China for 48 drones. Wing Loong II has 12 air-to-surface missiles. It is currently being used in Libya’s civil war.

What is the specialty of Predator-B drone?
Predator-B is also known as MQ-9 Reaper. It is used by the US Air Force. These drones are equipped with four laser-guided air to ground Hellfire missiles with weapons. One who shoots accurately and does very little damage around. With its weight of 4,760 kg, it can fly at a speed of 230 kilometers per hour. The drone is also used in surveillance, search operations, and relief-rescue missions.

Cyclone may form on the west coast due to ‘Gulaab’, there will be heavy...

28/09/2021/12:36:pm
New Delhi: The Meteorological Department (IMD) has given information about Cyclone Gulab. IMD officials say that Cyclone Gulab made landfall in Andhra Pradesh on...

Any US attack on Iran could trigger a ‘full war’: senior Iranian leader

Now the Afganistan will starve! Conflict pushed it to destruction