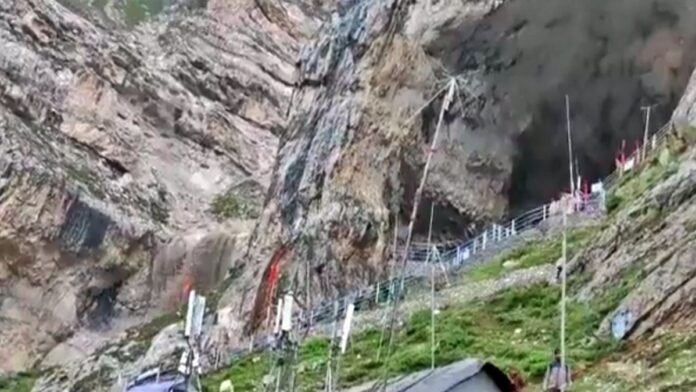 Srinagar: Big information is coming out about Amarnath Yatra. A cloud has burst near the holy cave. In this, information has been received about the death of 10 people. The accident happened at 5.30 pm. After the cloudburst, there is a flood in the camp. Relief work has started. NDRF and SDRF are engaged in rescue work. The injured are being taken to the hospital by helicopter.

According to the information received, the cloud has burst two kilometers away from the holy cave. At that time 12 thousand devotees were present in the camp when this accident happened. At the same time, pictures and videos of this accident have also come to the fore. Where as soon as the cloud burst, there was a flood of water in the camp. As soon as the water came, there was a scream among the people present there.

Water from heavy rain
Giving information about this accident, ITBP said that after heavy rains in the upper areas, water came from the top of the cave. The rain has stopped for now. Some casualties are feared, but there is no clarity yet. Rescue teams are at work. ITBP teams are engaged in rescue work along with other agencies.

Anchors and tents got hit
IGP Kashmir Vijay Kumar said, “Some langar and tent clouds in the holy cave have come under sudden floods, two people have been reported dead. Rescue operation is on by Police, NDRF, and SF. The injured are being airlifted for treatment. The situation is under control.

ITBP PRO Vivek Pandey said that about 30-40 tents were caught in the flood due to heavy rains in the drain. He told that there were 100 tents in the camp. There were six to seven people in each tent.

Rain wreak havoc in Uttarakhand, 5 including three children died due to collapse of...

30/08/2021/10:02:pm
Pithoragarh: Five persons, including three children, were killed and two others went missing when three houses collapsed during heavy rains in a village in...

Shahid Kapoor’s new action film announced, know whose life is based on the story...

21/10/2021/9:12:pm
New Delhi: Whatever film Shahid Kapoor is in, he plays that character with utmost seriousness. For each of his characters, Shahid Kapoor molds himself...

10/08/2020/8:36:pm
Bokaro: The education minister of Jharkhand, Jagarnath Mahto, is now determined to complete the inter studies. For this, they have also taken admission. In...

Taliban can make Afghan parliament Islamic shura, it was gift from India

26/08/2021/3:45:pm
Kabul: India's relations with Afghanistan have always been friendly. India has invested generously to aid in the reconstruction of Afghanistan since the mid-2000s. Especially...