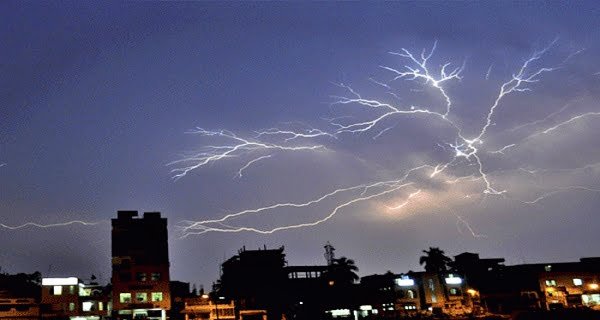 Jaipur/Kota: 18 people, including seven children, died in separate incidents of lightning in Rajasthan’s Jaipur, Jhalawar, and Dholpur districts on Sunday. Police said that 21 people, including six children, were also injured in the incidents that took place in different villages of the state. In a major tragedy in the capital Jaipur, 11 people were killed and eight others were injured when lightning struck near the Amer Fort.

Most of the dead were youths who had gone to enjoy the pleasant weather on a hill near the fort. Some of them were taking selfies on the watchtower. While many were present on the hill. Late in the evening when the people present on the watchtower collapsed due to lightning. Jaipur Police Commissioner Anand Srivastava said, “11 people were killed and eight were injured in the lightning strike.”

He said that relief and rescue operations are going on for the injured. Medical and Health Minister Dr. Raghusharma reached Sawai Mansingh (SMS) Hospital to take stock of the treatment of the injured in a lightning accident in Amer. Chief Whip Dr. Mahesh Joshi, MLA Amin Kaggi were also present.

He gave necessary instructions for the treatment of the injured. Kansas Police Officer of Jhalawar district said that Radhe Banjara alias Bavla (12), Pukhraj Banjara (16), Vikram (16), and his brother Akhraj (13) standing with their animals under a tree were killed by lightning in Garda village. It happened on the spot. One cow and about 10 goats also died in the incident. The SHO said that the injured children Rahul, Vikram, Rakesh and Mansingh, and Fulibai have been admitted to the hospital where their condition is stated to be out of danger.

My deepest condolences to the families of the affected, may God give them strength. Instructions have been given to the officials to provide immediate assistance to the families of the victims. Governor Kalraj Mishra has expressed deep sorrow over the death of four children in Kanwas village of Kota and three children in Kudinna village of Bari (Dholpur) due to lightning.

The Governor has also expressed condolences by taking seriously the painful death of people due to lightning while taking selfies in the watchtower of Amer. In view of the rainy season, the Governor has also appealed to the people to exercise caution and vigilance for the safety of life and property.

Government amended motor vehicle rules, it is not necessary to keep spare tire in...

22/07/2020/8:09:pm
New Delhi: In order to boost the electric vehicle, the government has made changes in the Motor Vehicle Act. Under the new amendments issued...