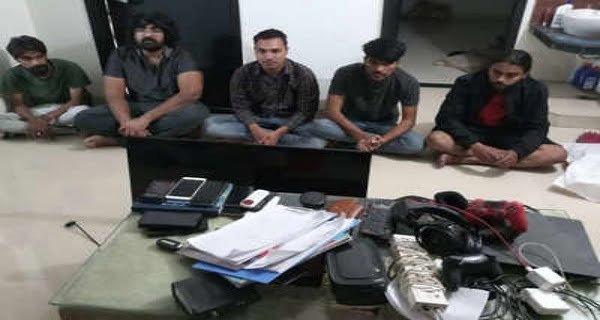 Indore: While disclosing the online betting on the T20 World Cup final played between Australia and New Zealand on Sunday, the police in Indore. Six people have been arrested in Indore. A police officer gave this information on Monday.

Additional Superintendent of Police, Anti-Crime Branch Guruprasad Parashar said that these people were caught on Sunday night from a house in the aerodrome area on the information of an informer while they were booking bets for the T20 World Cup final. He said that the police have seized a laptop, 21 mobile phones, a TV, and other equipment along with betting accounts from the possession of the bookies.

In fact, the Crime Branch had received information that betting is going on in the ongoing cricket match between Australia and New Zealand in House No. 81-A of Shubham Palace Colony of Aerodrome police station area. After the information, the Crime Branch and the Aerodrome Police jointly raided the house and caught 6 bookies from the spot. The names of those who run illegal cricket betting are Sushil, Shailendra, Avinash, Mahesh, Kunal, and Janardhan.

Parashar said that a detailed investigation is being done by registering a case against the accused under the relevant provisions of the Public Gambling Act and the Information Technology Act. Australia won the T20 World Cup for the first time by defeating New Zealand by eight wickets in the title match played at the International Cricket Stadium in Dubai on Sunday.

24/10/2020/10:49:am
New Delhi: The Union Public Service Commission (UPSC) on Friday announced the results of the Civil Service Preliminary Examination 2020 on its official website....

13/08/2020/10:28:pm
Bengaluru: India hockey team captain Manpreet Singh and five other hockey players who were found COVID positive and isolated in the National Centre of...

15/02/2021/2:10:pm
Brazzaville/Conakry: Health authorities in Guinea today declared an outbreak of Ebola in the rural community of Gouéké in N’Zerekore prefecture after three Ebola cases...

24/09/2021/8:54:pm
Washington: US Secretary of State Antony Blinken with Pakistan Foreign Minister Shah Mahmood Qureshi on the sidelines of the 76th session of the United...