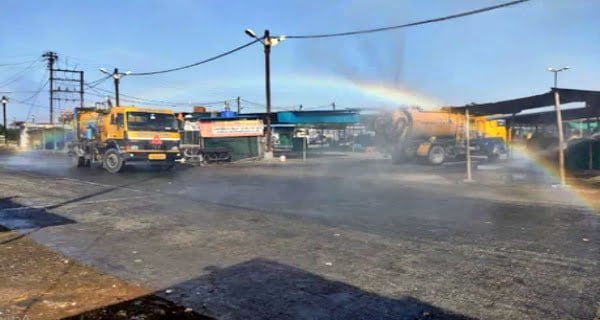 Indore: Indore, the most corona-infected city in Madhyapradesh, is to be unlocked from June 1. CM Shivraj Singh said this in the review meeting held here recently. Opening the city after the second and frightening wave of Corona is nothing short of a challenge. The administration and the municipal corporation have started preparations for this. Firstly fruits and mandis are being sanitized.

Work is being done on war footing to free Indore from Corona. After a strict lockdown for the last 10 days, the exercise to slowly open the city has started. The city is to be opened from 1 June. But the administration does not want to take any kind of risk. This is the reason why the entire city is being sanitized. It started with fruits and vegetables associated with common people.

Fleet of lorries
Sanitization was done at Choithram Mandi with 22 vehicles and Niranjanpur and Rajkumar Mandi with 25 vehicles simultaneously. Collector Manish Singh said that special attention will be paid to sanitization in those areas where a large number of people have to come. There is a possibility of spreading corona infection from there. To prevent Covid-19, Niranjanpur vegetable market was sanitized today through 15 vehicles. This fleet consists of 5nos of 360-degree sanitizers, 5 nos, large pressure machines, 5 nos, pressure jet tankers.

Vegetable spraying
After that, Collector Manish Singh and Corporation Commissioner Pratibha Pal Rajkumar reached the vegetable and fruit market to prevent corona infection. 10 vehicles were used to sanitize Rajkumar Mandi. 22 vehicles had to be installed in the Choithram vegetable market area. These included 10 tractors with 360-degree sanitization, 6 large pressure machines, two jet pressure machines, 4 jet tankers. Corona infection was also the highest in the cleanest city in the country.

23/05/2021/10:21:am
New Delhi: The Indian Medical Association (IMA) on Saturday sent a legal notice to yoga guru Ramdev over his alleged statements against allopathy and...