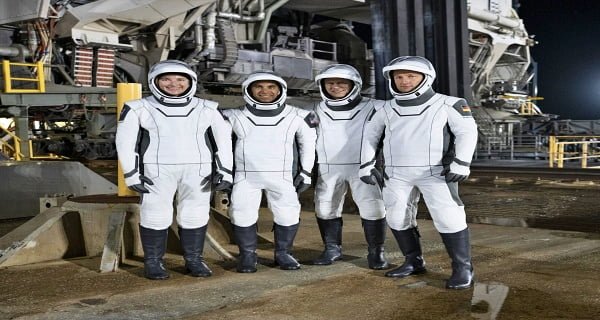 Washington: The American space agency NASA and Elon Musk’s rocket company SpaceX have together sent astronauts to the International Space Station (ISS) for the third time. Under this, four astronauts have been sent this time. These include two young astronauts and a veteran astronaut. This space mission has been named Crew 3. The launch vehicle used in this mission also carries a two-stage Falcon 9 rocket. In its upper part, there is a dragon capsule for the crew. It was launched from NASA’s Kennedy Space Center in Florida at 9 pm local time.

This launch of the Dragon spacecraft was telecasted live on NASA TV. NASA said intermittent rain and clouds cast doubt on the launch’s prospects, but the weather cleared during the flight. Live video footage from NASA shows four crew members sitting in the pressurized cabin of their gleaming white SpaceX Crew Dragon capsule in the final minutes before launch.

Three US astronauts and a European Space Agency astronaut will reach the space station after a nearly 22-hour flight, covering a distance of about 250 miles (400 km) from Earth on Thursday evening. After the end of the US Space Shuttle program in 2011, last year NASA and SpaceX together decided to continue the launch in space. Under this, this is the third flight, in which astronauts have been sent from Dragon Capsule.

The Crew 3 campaign also includes two astronauts who have just graduated from NASA. The first among them is Raja Chari. 44-year-old Raja Chari is a test pilot of a fighter aircraft of the US Air Force. He is the mission commander of this campaign. Along with him is 34-year-old Kayla Barron. He is a US Navy Submarine Officer and Nuclear Engineer.

Second in command veteran Astronaut Tom Marshburn is also in the team of 4 astronauts. He is a medical doctor and also a former flight surgeon of NASA. He has been to the space station twice and spacewalked 4 times. While the fourth member is European Space Agency astronaut Mattias Maurer. He is a science engineer.

Chari, Baron and Maurer went on their first spaceflight on Wednesday. With this, he became the 599th, 600th and 601st humans in space. Both Chari and Baron are from the first group of 18 astronauts selected for NASA’s upcoming Artemis mission, which aims to send humans back to the moon.

04/05/2021/10:23:pm
Mumbai: The Bombay High Court on Tuesday asked the Maharashtra government and civic bodies to consider using part of fines collected from the people...

For the first time in Germany, more than 1,000 deaths occurred in one day...

12/02/2021/11:34:pm
New Delhi: On Friday, strong tremors of Earthquake were felt across North India including Delhi-NCR. Its impact was seen from Punjab to Jammu and...

15/09/2020/10:14:am
New Delhi: Chief Minister Arvind Kejriwal said on Monday that more than 500 students from Delhi government-run schools had succeeded in this year's JEE-Main...