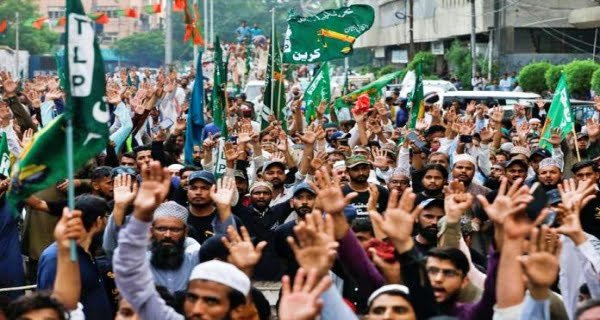 Islamabad: In return for withdrawing the recently launched protests by the extremist organization Tehreek-e-Labbaik Pakistan (TLP), the government of Pakistan has lifted the ban on TLP. More than 20 people had lost their lives in the said protest against the government, half of which were policemen.

The organization was banned in April this year after TLP demanded the return of the French ambassador and violent protests over the issue of blasphemous cartoons published in France. The government, which recently entered into a confidential agreement with the TLP, issued a formal notification on Sunday and removed the TLP from the list of banned organizations. This step has been taken after the organization has expressed its commitment to work within the ambit of the law in the future.

The TLP had started the protest from Lahore on 18 October and announced a procession till Islamabad. The TLP had staged protests demanding the return of the French ambassador and the release of TLP chief Saad Rizvi. During this, at least 21 people lost their lives in the violent clashes between the police and the protesters, including 10 policemen.

16/05/2022/9:02:am
New Delhi: Incidents of firing in America are continuously coming to the fore. In fact, after the incident of Saturday's Buffalo, now a case...

10/01/2022/9:06:pm
New Delhi: The havoc of Coronavirus continues in Delhi, the capital of the country. Delhi Police officers and policemen are constantly coming in the...

Instagram Reels has given super features, learn how to use

15/11/2021/2:13:pm
Meta has added two new features to the reels of its platform Instagram. The first feature is Text to Speech and the second is...

Virat Kohli becomes the best cricketer of the decade, Dhoni gets...