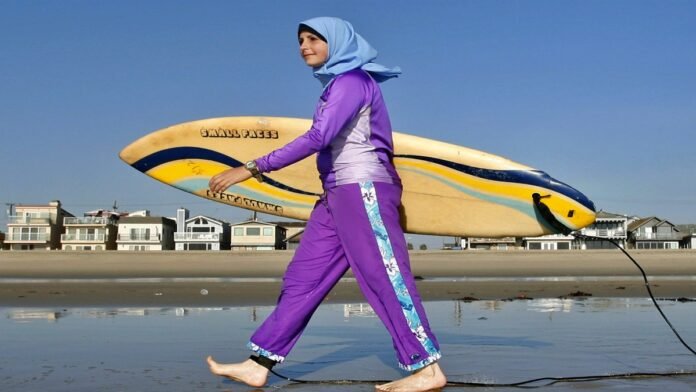 The all-in-one swimsuit used by some Muslim women to cover their bodies and hair while swimming is a controversial issue in France, where critics see it as a symbol of creeping Islamization.

In France, there has been a debate about the burqa for the past several years. Even in the year 2011, full face covering was banned by women in public places. France became the first European country to ban the burqa. This ban was implemented by then-President Nicolas Sarkozy. The then President used to say that Hijab or Burqa is an atrocity on women.

After this, on 16 May 2022, the mayor of the city of Grenoble ordered that Muslim women can wear burkini in the pool. At that time, Mayor Piol said on the French radio RMC – all we want is that women and men can wear clothes of their own choice. A ‘Burkini’ is a swimsuit designed for Muslim women in which only the face, arms, and legs are visible and the rest is covered. Now this decision has been overturned by the top court of France.

Mayor’s decision weakens secularism
After the court’s decision, Gerald Dormanin said – the decision of the mayor of the city of Grenoble to allow the wearing of burkini was going to weaken secularism. The decision taken by the court was based on the separatism law brought in 2021. On 16 May also, Dormanin had called the mayor’s decision contrary to the secularism of France. Also said that he would challenge it in court.

What is separatism law?
Under this law, the government can challenge the decisions of the local administration. Actually, France has very strict laws regarding secularism. If the local administration or state governments make any rules against them, then the central government challenges it in the court and the courts cancel these rules. The mayor’s decision regarding the burkini in Grenoble was overturned under this law.

11/03/2021/9:06:pm
Beijing: China has now complained about a BBC report, a few days after Britain's Ambassador to China Caroline Wilson was summoned to express her...

HC’s advice to Baba Ramdev, no problem with Coronil’s publicity, but refrained from making...

03/06/2021/2:07:pm
New Delhi: During the hearing of the DMA's application in the matter of Swami Ramdev's statement about doctors, the Delhi High Court said that...