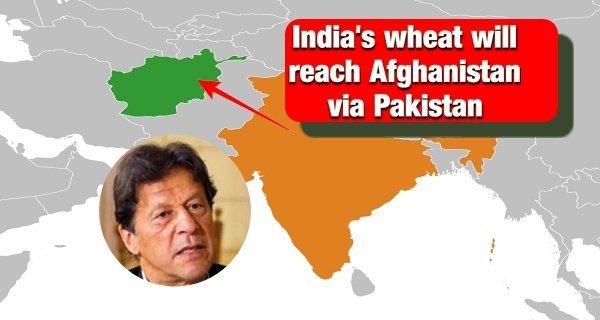 Islamabad: The Imran Khan government of Pakistan has opened all its avenues to send India’s wheat to Afghanistan. After the cabinet meeting, the Prime Minister of Pakistan, Imran Khan directed all the ministries to provide assistance. Last month, India met Taliban leaders during the Moscow format held in Russia regarding Afghanistan. During the meeting, India had offered immediate humanitarian aid to Afghanistan. This will be the first aid from India in Afghanistan after the arrival of the Taliban regime. Earlier, countries like Iran, UAE, and Pakistan have sent logistics and medical supplies to Afghanistan. According to a recent report by the United Nations, about 40 million people in Afghanistan may face a dire food crisis, while about 9 million are already on the verge of starvation.

Let us inform you that last month India had requested to send 50 thousand metric tonnes of wheat to Afghanistan as humanitarian aid. India had requested Pakistan to send Indian wheat through the Wagah border. Afghanistan’s acting foreign minister Amir Ahmed Muttaki last week requested Prime Minister Imran Khan to allow India to send wheat via Pakistan. He had said that the Taliban government is ready to take humanitarian help from India.

Children can die of hunger
According to the report of the news agency Reuters, the WHO said that about 32 lakh Afghan children will be victims of acute malnutrition by the end of the year. Out of these, about one million children are facing the danger of dying badly. The organization’s spokeswoman Margaret Harris said that this would be a big fight in the midst of the crisis spreading in the country.

20/05/2021/8:29:pm
Geneva: The United Nations' top human rights body told Thursday that it would discuss the 'pathetic human rights situation' of Palestinians in Gaza, the...

China closes US Consulate General in Chengdu and seizes building

27/07/2020/6:45:pm
Beijing / Chengdu: China told Somwar that it had taken over the building after the US Consulate General in Chengdu was vacated. China retaliated,...

How to lose your weight by eating healthy food