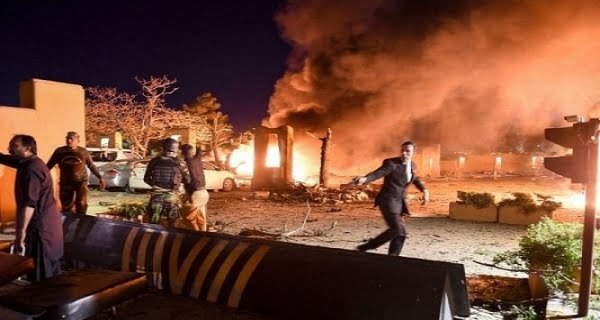 Karachi: At least four people were killed and 12 others were injured in a horrific bomb blast in the parking lot of a luxurious hotel in Quetta, a turbulent city in southwestern Pakistan. Officials gave this information and dismissed reports that a Chinese delegation was present in the building at the time of the blast. The explosion occurred on Wednesday night in the parking area of ​​the Serena Hotel in Quetta. Some vehicles parked in the parking lot caught fire after the explosion. Some early reports said that Chinese ambassadors were present at the hotel. Quetta is the capital of the Balochistan province of Pakistan.

According to police, preliminary investigation revealed that the explosive material inside a car exploded. According to the bomb disposal squad, 40 to 50 kg of explosives were used in the blast. A fire brigade rushed to the spot to extinguish the fire. Fire personnel were successful in overcoming the fire and now the process of freezing the place is going on. The sound of a huge explosion was heard from several kilometers away.

The impact of the blast shattered the windows of the nearby Balochistan Assembly, High Court and other buildings. The banned terrorist organization Tehreek-e-Taliban Pakistan (TTP) (Tehreek-e-Taliban Pakistan) (TTP) claimed responsibility for the blast. A TTP spokesperson said, “Our suicide bomber used his car full of explosives in the hotel.” However, police say initial investigation revealed that the explosive material was placed in a car parked in the hotel parking lot.