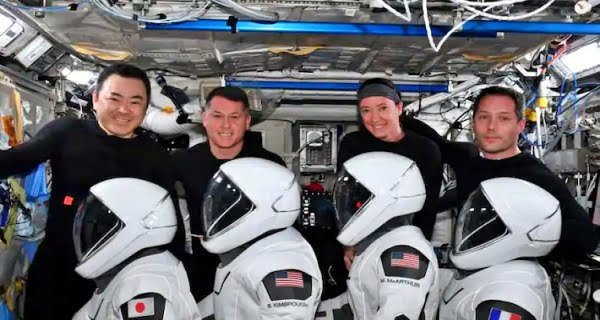 Washington: The mission of the SpaceX rocket, which reached the International Space Station to bring back the astronauts, has been postponed for the time being. In fact, due to the strong wind blowing off the coast of Florida, SpaceX had to postpone the return of four of its crew members from the space station to Earth. Astronauts from the US, France, and Japan were to leave the International Space Station on Sunday after a full six months. Meanwhile, the toilet of the capsule is also broken. In such a situation, these astronauts will have to wear diapers while returning to Earth.

NASA astronaut Megan MacArthur called the situation dire on Friday. He told, ‘His capsule fell in the Gulf of Mexico on Monday morning, but due to security reasons, Space X has postponed the itinerary of this crew to return to Earth after six months until Monday afternoon.’ He said that despite this we will see it. Will manage On his return to Earth, he and three other astronauts from his crew will spend about 8 hours wearing diapers in the SpaceX capsule. This SpaceX capsule can stay in space for 210 days, out of which it has already spent 200 days.

SpaceX, on the other hand, is targeting a Wednesday night flight to send a new crew as a replacement for the returning crew. This flight is already delayed instead of the scheduled one due to bad weather and the unknown medical problem of one member.
Russian film has been shot in space
He said the astronauts conducted a series of spacewalks to upgrade the station’s power grid. After this, due to an inadvertent start of the engine of a Russian rocket docked at the International Space Station, it left its designated orbit and went out. Which was brought back after a lot of hard work. Not only this, the Russian film director has also shot a film during this period.

What is SpaceX?
SpaceX is an Exploration Technologies Corporation, better known as SpaceX. A privately-held rocket and spacecraft company founded in 2002 by CEO and SpaceX lead designer Elon Musk, who is also the co-founder and product developer of Tesla.

SpaceX is the only private company in the world that regularly returns rocket stages to Earth so that they can be relaunched. The company has been regularly sending cargo to the ISS and is now launching astronauts. Musk’s company is also developing large spacecraft called Starships that will be used to build human settlements on Mars.

18/10/2021/12:50:pm
Berlin: Strict rules are being implemented to deal with Coronavirus around the world. A similar rule has been seen in the Hesse state of...

Shivraj Singh Chauhan became corona positive, said- All the people in contact with me...

04/03/2021/1:27:pm
Washington: Facebook announced that it plans to resume political and social issue advertisements on its platform beginning March 4."Unlike other platforms, we require authorization...

27/07/2020/6:53:pm
Singapore: Scientists in Singapore have developed a technique that will give the results of a laboratory test of Covid-19 in just 36 minutes. The...